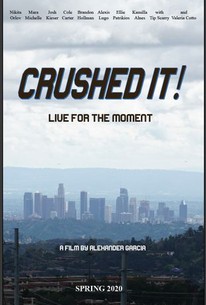 The story centers on Randy Jacobsen (Nikita Orlov), who moves to California against his parents' wishes, to live with his older brother (Tip Scarry). Randy has big plans of becoming a professional skateboarder, but gets sidetracked when he meets Danelle (Mara Michelle) at the local skate park, who happens to be dating the hometown hero (played by award-winning Australian actor Josh Kieser). Randy finds himself torn between getting the girl of his dreams and fulfilling his lifelong goal of becoming a pro skater.

Critic Reviews for Crushed It!

There are no critic reviews yet for Crushed It!. Keep checking Rotten Tomatoes for updates!

There are no featured reviews for Crushed It! at this time.