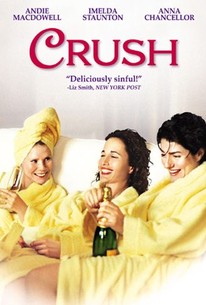 A woman edging into middle age finally finds the love of a lifetime; too bad she can't convince her best friends it's for real in this lively romantic comedy. Kate (Andie MacDowell), Molly (Anna Chancellor), and Janine (Imelda Staunton) are three close friends in their early forties who have been sharing a long run of bad luck in the field of romance. While all three are successful in their careers -- Kate has been named headmistress of an upscale private school, Molly is a doctor, and Janine's a police detective -- they've been striking out in the dating scene, and they get together on a regular basis to compare notes and drown their sorrows in cocktails and chocolate. One day, while attending the funeral of a colleague, Kate makes the acquaintance of Jed (Kenny Doughty), a good-looking man who remembers Kate as one of his teachers when he attended the school years ago. Despite the decade-and-a-half gap in their ages, there's a strong mutual attraction between Kate and Jed, and before the day is over the two are enjoying an affair. Molly and Janine are at once amused and appalled at Kate for dating a younger man, and while she tells them it's a short-lived fling that means little to either party, neither Kate nor Jed wants to walk away from their relationship; before long Kate and Jed decide they've fallen in love and plan to get married. The harder Molly and Janine try to convince Kate that she's making a mistake, the more Kate is determined to tie the knot with Jed, and eventually Molly and Janine decide to take drastic measures -- Molly hatches a plan to seduce Jed, while Janine captures their tryst on videotape.

Rosie Scanlon Jones
as Little Girl in Garden
View All

While McKay's debut feature is witty, weepy and easy on the eyes, it never lets the obligation to entertain interfere with the messy flow of human responses.

...the plot is so mechanical it squeaks.

There are as many misses as hits, but ultimately, it finds humor in the foibles of human behavior, and it's a welcome return to the roots of a genre that should depend on surprises.

Anyone who suffers through this film deserves, at the very least, a big box of consolation candy.

Feels like the first reel of Bridget Jones's Diary spliced onto Othello.

Not worthy of the theaters but worthy for the "Lifetime" crowd...

Crush is a half-comedy, half-weepie that doesn't really work, though Andie MacDowell is quite wonderful.

While it would be easy to give Crush the new title of Two Weddings and a Funeral, it's a far more thoughtful film than any slice of Hugh Grant whimsy.

There are pleasures to be had early on in "Crush," but they get fewer and farther between.

British comedy about fortyish female friends is as well-crafted as it is predictable.

Hard movie to get through. Pretty okay movie though.