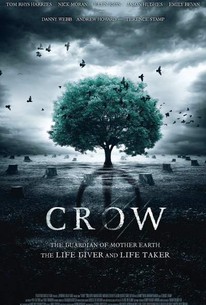 Crow is protector of the wood. He has lived there ever since the Crow tribe of travellers were brutally moved on from the farmstead nearby by ruthless developer, Tucker. Now Tucker wants the wood too and will stop at nothing to raze it to the ground. Crow must defend it with his life. The battle begins, but Tucker doesn't realise that he must contend with a man who has the power of nature behind him. Before the day is done, he and his men will learn the real meaning of terror in this original supernatural thriller.

Crow is a captivating story of good versus evil with great acting and some trippy imagery, which is beautifully shot.

Crow is a great cautionary tale of man's need to respect nature and its beautiful history.

we are never quite sure whether Crow is a vulnerable young man driven by trauma to psychosis and even murder, or whether perhaps he might be a holy fool and the divine embodiment of nature's revenge.

There are no featured reviews for Crow at this time.