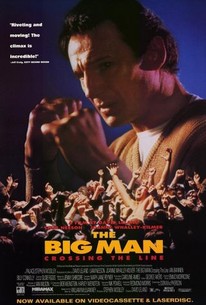 Adapted from the William McIlvanney novel The Big Man (which provides the film's alternate video title), this story concerns a shafted mineworker (Liam Neeson) who lost his job during a mid-'80s strike. Desperate to regain his manhood and a living wage, he decides to enter a bare-knuckle-boxing tournament to make money.

Macarena Domenguez
as Woman at Pool

Ken Drury
as The Stalker

Michael Marra
as Alex the Butcher

Phil McCall
as Sandy the Chemist

Nadia Bilchick
as Nurse
View All

Critic Reviews for Crossing the Line

In its present form, it comes across as a rather unpleasant and only fitfully absorbing film of social protest.

Leland and scriptwriter Don Macpherson have made one of Britain's finest existential thrillers in ages.

Beginning with Mr. Neeson, every member of the cast is as good as the circumstances allow.

It tells and tells its story but never delivers a punch that actually connects.

Leland strains for a profundity and seriousness that won't quite be squeezed from the material.

Audience Reviews for Crossing the Line