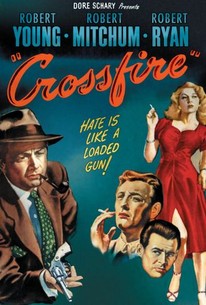 A landmark Hollywood drama for its sharp look at the touchy subject of anti-Semitic attitudes in the U.S., Crossfire is set in a hotel just after the end of WW II and begins with the murder of a Jewish guest. The prime suspects are a trio of recently returned GIs, and a level-headed detective sets off to find which one of them (if not all of them) is guilty. Robert Ryan gives a fine performance in an underwritten role, but the film is otherwise visually static and somewhat pretentious, lacking a meaningful style and showing little depth. Despite its flaws, the film has some power and caused controversy. Because of the film's subtext of prejudice and anti-Semitism, filmmaker Edward Dmytryk became one of the first 10 Hollywood figures blacklisted by McCarthy's House Committee on Un-American Activities.

Paul Kelly
as The Man

... the movie still has power, despite its pop psychology and message mongering.

Producer Dore Schary, in association with Adrian Scott, has pulled no punches.

While the film remains a respectable thriller, only Ryan's crafty, quietly deranged performance lifts it out of the ordinary.

This ultra-low-budget thriller did what all great B movies do: it broached a subject that 'respectable' movies wouldn't touch.

It is a masterly exercise in technique.

Crossfire is an unusually good and honest movie and may -- I hope, will - prove a very useful one.

Dealing with racial bigotry, this tense thriller combines a message drama with film noir, resulting in one of the best films of Edward Dmytryk (who was later blacklisted), with top-notch acting from three Roberts, Mitchum, Ryan, Montgomery.

It has a very strong and powerful message against anti-Semitism.

a drawn-out hour of investigation that looks like a schoolyard game of C.S.I.

I bought this socially conscious crime thriller based on the packaging and the actors. I had never heard of it, and that's a crying shame because this film deserves a wide audience, even today. It should be re-made with a more contemporary script because its message, regarding anti-Semitism and prejudice is more relevant than ever. Crossfire was adapted from the Richard Brooks novel The Brick Foxhole, in which the murder concerns a homosexual, whereas the film dropped the book's sub-theme of homophobia to focus on the more cinematically "acceptable" topic of anti-Semitism. That being said, I am surprised the original idea hasn't been filmed in the post-censorship era. I love the way the murder is filmed in shadows and thus the audience is "in the dark" as to the identity of the murderer until the climax. Although the killer's body language is instantly recognizable and the film has its characters drift to the same conclusion before the halfway point, the tension comes from proving it and saving the police's initial target, an innocent soldier. I could not imagine a better cast for the topic. I love Gloria Grahame in every noir she's been in, Mitchum is his usual laconic best, and Robert Young is the epitome of trustworthiness. It's tough seeing Robert Ryan, who I like in heroic roles, as the bigoted villain in this film. Crossfire didn't win any of the 5 Academy Awards for which it was nominated, which is a shame. Even though the similar Gentlemen's Agreement won Best Picture, Crossfire is superior due to its operating on two levels: an excellent murder mystery manhunt and a "message picture." Director Edward Dmytryk's stark, hard-hitting examination of a hate crime was way ahead of its time in 1947, and has lost neither its topicality nor its punch in the years since.

When a Jewish man is beaten to death in a hate crime, police detective Robert Young finds his suspicions as to the culprit difficult to prove. Although it has many of the visual trappings of Film Noir, Crossfire is more of an examination of prejudice and its repercussions in society. The crux of the film is Young's "hate is a gun" speech that highlights the dangers of blind hatred, and as such it's a very well meaning as well as well written film. Young gives a solid performance as the sardonic cop, as does Robert Mitchum as a soldier caught up in events although his dominating presence is a little too thin on the ground. The ever reliable Gloria Grahame also appears as a bitter vamp and Paul Kelly is an interesting supporting character but it's Robert Ryan's show all the way whose chilling portrayal of a racist psychopath was nominated for an Oscar. Perhaps lacking a focal character, Crossfire is still a very interesting and thoughtful detective story with a timeless message.

A man is found beaten to death in his apartment. The last people he was seen with were four soliders. One of them did it, but which one? Robert Young as a police detective, in a better performance than I would normally expect out of him, wants to find out. Even though it's pretty obvious who the killer is early on, I won't give it away here. This film about prejudice and Anti-Semitism should remind all of us how dangerous intolerance like that can be if taken to the extreme.

A social commentary that pretends to be a murder mystery. Crossfire's main purpose is explaining prejudice or hatred of somebody just because they are a member of a certain group. For that emphasis, it's a very interesting movie and sets it apart from most films in its' time, but its minor storyline is more compelling.