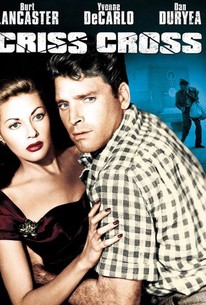 Armored car guard Steve Thompson (Burt Lancaster) should know better than to make whoopee with his no-good ex-wife Anna (Yvonne De Carlo) -- especially since she's now married to gangster Slim Dundee (Dan Duryea). Caught by Slim in a compromising position with Anna, Steve alibis that he's merely planning an armored car heist. Slim doesn't completely buy this, but he decides to go through with the robbery, sending along several henchmen to make sure that Steve doesn't pull a double-cross. But he hasn't reckoned with Anna, who convinces the wounded Steve to steal the loot and skip town with her. No one ever wins in a set-up like this; the audience knows this, but follows along just the same. Based on a novel by Don Tracy, Criss Cross is a terse, doom-drenched film noir from a master of the game, director Robert Siodmak. And yes, that handsome hunk dancing with Yvonne De Carlo in the opening scene is an unbilled Tony Curtis.

Joan Miller
as The Lush

Michael Cisney
as Chester
View All

Criss Cross is cops and robbers stuff with a better than average budget of excitement.

A hectic fusion of on-location texture and stylish artifice.

Solid little thriller that inspired Steven Soderbergh's "The Underneath."

All of the elements for a great film noir are here.

Wonderful fatalistic film noir by Robert Siodmak. The mood is perfect and aided by an excellent black-and-white cinematography. Excellent performances too!

I'd like to see this movie again, it was interesting and exciting, I liked it, but I can't remember it very vividly.

Tough, dark noir. Good performances by experts in the genre. Yvonne De Carlo is breathtakingly beautiful here and gives a fine account of a heartless shrew. Keep an eye out for Tony Curtis dancing with her in one scene.

A great noir about a dumb guy. Yvonne DeCarlo is gorgeous and Lancaster plays the big dumb animal perfectly.