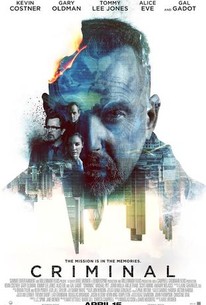 Critics Consensus: Despite the valiant efforts of a game and talented cast, Criminal has little to offer beyond the bare minimum expected by the most undemanding of genre enthusiasts.

Critics Consensus: Despite the valiant efforts of a game and talented cast, Criminal has little to offer beyond the bare minimum expected by the most undemanding of genre enthusiasts.

Critic Consensus: Despite the valiant efforts of a game and talented cast, Criminal has little to offer beyond the bare minimum expected by the most undemanding of genre enthusiasts.

From Summit Entertainment. The memories and skills of a CIA agent are implanted into the brain of a dangerous criminal in order to stop an international terrorist. (C) Summit

Piers Morgan
as Himself

On DVD This Week: The Boss, Hardcore Henry, Sing Street, and More
Box Office: It’s Still A Jungle Out There
Video: Tracking Down the Cast of Criminal

It's lazy, corrupt and sleazy filmmaking, the kind of film that's killing the business.

The movie is a little more fun than it has any right to be, thanks to its super-serious cast (including Tommy Lee Jones, Ryan Reynolds, Gary Oldman, and Gal Gadot) and the straight-faced approach to its ridiculous shenanigans.

All the ingredients are there for a pleasant pander to grumpy old white men: the craggy actors, the foreign bad guys wielding confusing technology, the kindness of beautiful young women, and the nobility of sacrifice.

Criminal is an action-thriller with a science fiction twist. To the extent that its purpose is to energize and involve an audience, it succeeds.

It's wanton, low-down entertainment without the flair to pull this stuff off, or the neural stem cells to make wit or logic much of a priority.

A unique take on a CIA spy thriller with a Frankenstonian spin, Criminal is a hard-hitting, tech-savvy, high octane adrenaline rush with underlying social and moral implications ripe for discussion.

Criminal wants to give the impression of being a more thoughtful film than it actually is.

For the most part it's a pretty by the number thriller, riddled with cliches, that slightly sets itself apart because of its sheer insanity.

Kevin Costner is an engaging and complex character that shows different depths throughout the film.

Criminal is a harmless, if disposable piece of pre-summer entertainment, and as is so often the case, even when the material doesn't measure up, Kevin Costner is just eminently watchable.

They all yell at the sky while shaking their fists, utter overly dramatic lines with such conviction, and seem fully aware of the absurdity of the film.

The film starts with an interesting setup but it slowly unravels into an odd Bourne style of storytelling. I was hoping to enjoy this film with a very strong cast and concept, but it is quite content to bore with repeated aggressiveness. I still can't understand why they needed a savage person like Costners character to implant the memories in. Tommy Lee Jones is very thankless in a role that could've been played by any up and coming person. The final confrontation lifts an otherwise pointless film that I'm still attempting to understand. I keep wondering why a talented actor like Gary Oldman can be lured onto these thrillers, this empty film never lifts from the concept which is a giant shame. This had big potential but unfortunately is left in the hands of a director and screenwriter who hold out on emotion and storytelling. 18-06-2017.

Criminal is a gritty spy thriller with a sci-fi edge. When a CIA agent is killed during an op to stop a terrorist from getting a computer program that can hack a country's nuclear defense codes an experimental procedure is done to transfer his memories to someone else; a medically compatible death-row inmate who begins to integrate the memories and eventual attempts to complete the mission. Featuring Kevin Costner, Gary Oldman, Tommy Lee Jones, Ryan Reynolds, and Gal Gadot, the film has an impressive cast. And the action scenes are intense and exciting. But the writing is rather weak, and doesn't do a very good job at selling the believability of the concept or the plot. Also, the characters are all pretty much generic stereotypes. Yet for a formulaic action-film, Criminal is entertaining and provides a number of thrilling fight and chase sequences.

I think this movie has an interesting concept. I'm not lying about that, it's not like this had the most interesting concept I've ever seen, but it's pretty intriguing. Transplanting a CIA agent's memory onto someone else in order to help stop this hacker from selling secrets that would put the entire U.S in danger. But, if I'm being completely honest, this is one of the most boring films I have seen in a long time. I've certainly seen worse movies. Like, for example, London has Fallen was a worse movie than this, but that movie had so much action that it was almost hard to be bored by it. I'm not even saying the film was bad in the conventional sense. Well, really, the narrative is really poorly written and somewhat convoluted, but action films have had convoluted stories for the longest time, The Matrix anybody, but that hasn't kept a lot of them from being entertaining as fuck. While there are some shootouts and fight scenes here, this doesn't really even qualify as an action movie. Once Bill Pope's thoughts are transplanted to Jerico, the movie really does take fucking forever until they actually do anything with them. Jerico just goes around by a prick to everybody, all the while he starts getting flashbacks to Bill's memories and it just felt like they were artificially extending the length of the film. I swear, it's probably an hour into the film before it feels like they actually move the story forward. I literally cannot remember much of everything that happened after Jerico has Bill's memories given to him. I watched this movie less than a day ago and already I can't remember much of anything. Though, to be fair, I have seen films that I've forgotten in a shorter time than this one. Once they do get the story going, the film does show signs of improvement, but it's not really much, cause it's still kind of boring. I do like the idea of Bill's memories influencing this man, who cannot feel empathy and does what he wants, to change 'his ways', as it were. It's not great, but at least it gives the character of Jerico an arc. And Kevin Costner is quite good in this movie as it is, so he makes the character somewhat enjoyable to watch even if the film isn't. I found it surprising that Ryan Reynolds also appeared, in really short bursts, in this movie. Surprising if only because I'm sure Ryan did not come cheap. It's sort of like, what's the fucking point? Sort of like having Vin Diesel voice Groot in Guardians of the Galaxy when all he says, literally, is three words over and over. Though, at the very least, with Vin, he voiced the character in several different languages, so that made paying him, I'm sure, millions of dollar 'justifiable'. I'm not saying Ryan got $10 million for appearing in this movie, because he appears so little in the movie that it might as well have been spent on an unknown actor, but he still commands a lot of money that didn't really help you in the long run, because this film wasn't commercially successful. That's not the point, really, but it was something worth pointing out. Gal Gadot, who plays Bill's widow, also did a good job here. I can't really complain much about the cast, the problem is in the scripting and the pacing. The film just bored the ever-loving shit out of me, what else can I really say BUT that? I wouldn't recommend it, it should have been 20-25 minutes shorter than it actually was. Kevin Costner is good and that's probably the only reason anyone should even consider watching this movie. Eh, can't really say I enjoyed this.

Standard espionage thriller with a tiny bit of a sci-fi curve. All the participants play it straight but nobody worked too hard here. Not boring, but no surprises either.