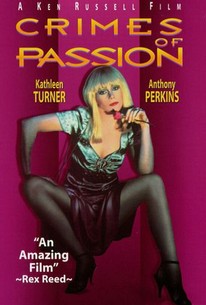 Joanna Crane (Kathleen Turner) is a cold, workaholic sportswear designer, divorced and dedicated only to her job. Once strapped into that role, Joanna looks for an "out" and finds it by donning a wig and hitting the pavement as a $50/trick hooker named China Blue. Explicit scenes show her at work on her night job, including a long S and M segment with a policeman. While making money as China Blue, Joanna runs into a menacing, fanatic preacher (Anthony Perkins) who is out to save her from this life of sin, but in the meantime, he is also busy watching nude girly shows. As China Blue and the sexually ambivalent Reverend heat up their relationship, he becomes difficult to read: is this psycho reverend a killer? While China Blue is plying her trade, Bobby Grady (John Laughlin) has finally realized after 12 years of marriage that his wife Amy (Annie Potts) is frigid and just as he has this remarkably delayed insight, he is assigned by Joanna's boss to find out if she is stealing designs or not. By tracking Joanna, Bobby sees her transformation as China Blue and as might be expected, sex is not far behind.

Seth Wagerman
as Jimmy
View All

Critic Reviews for Crimes of Passion

...Turner retains the sleekness she laminated onto "Body Heat," with added nuance and style.

Good performances and an interesting idea are metamorphosed into one of the silliest movies in a long time.

An extraordinary sensory experience... it becomes more like an Expressionist depiction of sex than a straightforward realist narrative.

The divine madness of Ken Russell is in full bloom here.

It plays out as a cheesy and shrill satire on America's sexual mores.

The satire is too awfully confused about the differences between sex and love to be making profound or ironic statements about the nature of romance.

Ken Russell's searing drama about life and sex in America.

Audience Reviews for Crimes of Passion

This seemed like it would be a good movie at first, it's got an interesting plot, good actors, and it starts out good, but it disappoints in the end. Overall, it's just okay.

Ken Russell's masterpiece has cult movie written all over it. A lurid, extreme sex-and-violence fantasy porno-movie, it is also a brilliant satire on the American way of sex. Kathleen Turner really goes the limit as an actress in her role as China Blue. She looks great and gives more to the film than it really deserves. This is getting more hotter than Turner's latest film, 1981's Body Heat. Much of the dialogue is clever, witty, and bitingly effective. The performances are top notch - particularly Anthony Perkins as the maniacal priest whom is captivated by the street-smart, fashion-designer-cum-hooker Turner. The sexual scenes are bold, but not sexually explicit.