The Crime of Padre Amaro2002 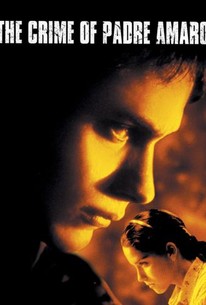 Critics Consensus: Though melodramatic, El Crimen del Padre Amaro's critique of the Catholic church is a timely one.

Critics Consensus: Though melodramatic, El Crimen del Padre Amaro's critique of the Catholic church is a timely one.

Critic Consensus: Though melodramatic, El Crimen del Padre Amaro's critique of the Catholic church is a timely one.

The Crime of Padre Amaro Photos

A priest discovers the path of virtue can be steep, and temptation can demand a heavy price, in this controversial drama from Mexico. Father Amaro (Gael Garcia Bernal) is a young Catholic priest whose mentor, the Bishop (Ernesto Gomez Cruz), expects great things from him. However, like all priests, Amaro must first be assigned where he is needed most, which leads him to the small rural community of Los Reyes, where Amaro is to assist Father Benito (Sancho Gracia). To his shock, Amaro discovers Benito is hardly following Holy Law -- he's having an affair with Sanjuanera (Angelica Aragon), a woman who runs a local restaurant, and he's been helping a drug dealer launder his profits in exchange for large donations to the church, which Benito feels is justified as the funds are being used to build a hospital and orphanage for the poor. Amaro is disgusted with Benito's actions, but he soon discovers his own weaknesses when he falls in love with Amelia (Ana Claudia Talancon), Sanjuanera's teenage daughter. As Amelia finds herself falling for Amaro, she breaks off her relationship with Ruben (Andres Montiel), a reporter. Ruben responds by publishing a story which reveals the details of Benito's dealings with the drug dealers; Benito in turn tries to lay the blame at the feet of noble Father Natalio (Damian Alcazar), whose work with local peasants has been wrongly interpreted as supporting armed revolutionary factions. As Amaro tries desperately to distance himself from the growing scandal, he receives shocking news from Amelia when he learns she's pregnant with his child. The Crime of Father Amaro's portrayal of corruption within the Catholic Church led to an outcry from Catholic organizations, both in Mexico and the United States, where they attempted to organize a boycott of the film. However, the tactic failed in Mexico, where the controversy helped to boost ticket sales, making it the highest-grossing Mexican film ever in its native country.

Pedro Aemendariz
as The Mayor

Enrique Vasquez
as Assailant No.1

Cristo Yanez
as Assailant No.2

Enrique Gilardi
as Drug Friend No.1

Jaime Cancino
as Drug Friend No.2

Pablo Hoyos
as Drug Friend No.3

Daniel Posterman
as Drug Friend No. 4

Dino Demichelis
as Drug Friend No. 5
View All

Critic Reviews for The Crime of Padre Amaro

For all of the criticisms of the Church in El Crimen del Padre Amaro, Carrera is quick to defend the basic humanity of his characters.

It's not hard to see why Mexican audiences are lapping this up.

A lurid but timeless reminder that the bureaucracies and regulations of organized religion have nothing to do -- indeed are often at odds -- with living a God-ward life.

Nothing more than a stifling morality tale dressed up in peekaboo clothing.

The director Carlos Carrera, who is acceptably talented, keeps the story on track -- on its various tracks.

Lurid drama that goes to ridiculously great lengths to draw its sad and tawdry picture.

Like Father like Son, for soon Amaro is giving the beautiful waitress, Amelia (Ana Claudia Talancón) ... her Catechism lessons in bed ....

While the issues the film raises are acutely topical, Carrera seems bent on carrying on a crusade rather than creating a realistic drama.

The drama was so uninspiring that even a story immersed in love, lust, and sin couldn't keep my attention.

For all its oddities and deliberate controversy, Padre Amaro is at bottom a very melodramatic soap opera. It's not a bad one, but it's pretty much 99 and 44/100ths pure.

A muckraking tale of priestly corruption, hypocrisy and illicit love that smothers its reformist protest beneath a sweaty cassock of sexual soap opera and overheated religious symbolism...

Audience Reviews for The Crime of Padre Amaro

Really good movie. Gael Garcia Bernal is a top of the line actor. This is a well made, well written, and well done film.

One of the most controversial films ever made

One of the most provocative, captivating and controversial films of the year. An 1875 novel by Portuguese writer Eca de Queiros is updated to modern Mexico, becoming a slick, well-acted melodrama. The film sparked controversy in Mexico for its portrayal of the Catholic church. Impressive.

Lurid, one-sided assault detailing corruption within the Catholic church. What a fresh idea! Wildly schizophrenic film abruptly changes focus from one story to the next as it recounts various stories of immoral priests in Latin America, who struggle between their religious vows and earthly desires. Ultimately, nothing is resolved and the audience is left with a lot of unanswered questioned in this thoroughly unsatisfying film.

The Crime of Padre Amaro Quotes