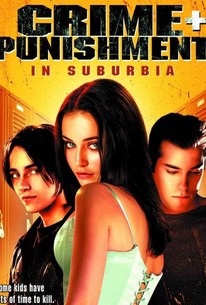 Critics Consensus: Despite the beautiful visuals, Crime and Punishment is too somber and pretentious. Also, the acting is of mixed quality.

Critics Consensus: Despite the beautiful visuals, Crime and Punishment is too somber and pretentious. Also, the acting is of mixed quality.

Critic Consensus: Despite the beautiful visuals, Crime and Punishment is too somber and pretentious. Also, the acting is of mixed quality.

Recalling both The Postman Always Rings Twice (1946) and American Beauty (1999), this teen drama recounts the trials and tribulations of one very dysfunctional family. Roseanne Skolnik (Monica Keena) is a popular high school student who is dating Jimmy (James DeBello), the football captain. She also lives in a family where her embittered mother Maggie (Ellen Barkin) is plotting to murder Roseanne's violent drunken stepfather Fred (Michael Ironside). After a smashed Fred rapes her, Roseanne starts plotting her stepfather's demise too. She ropes her boyfriend into doing the deed, and soon she finds herself under arrest and on trial for the crime. With all of her friends shunning her, she confides in her creepy voyeuristic neighbor. This film was screened at the 2000 Sundance Film Festival.

Bonnie Somerville
as Stuck Up Girl

Jack Angel
as Russ
View All

You wouldn't want to give any of these people the time of day in real life. They are blah or worse, and they are headed for some violent confrontations that seem pointless because they are so unworthy of our attention in the first place.

Far from the head-banging alternative to teen movies the filmmakers intended -- it's more like a self-important Poison Ivy sequel.

Director Rob Schmidt photographs the action in that visually clichéd, MTV-influenced manner now de rigeur in much of independent cinema.

Every single thing about Crime and Punishment in Suburbia is stolen and tired.

The ghost of Dostoevsky should sue.

The best thing that can be said about Rob Schmidt's Crime and Punishment in Suburbia -- aside from the fact that it's over in less than two hours -- is that it doesn't glorify violence committed by sexy teens.

This self-satisfied waste of space, care of flashy new filmmaker Rob Schmidt, manages to be even more insipid than the overrated American Beauty, if that were possible.

This is one twisted pic.

A story so stupid and contrived that old Dostoyevsky might have somersaulted in his grave by now.

To sum up in Raskolnikov's own words, 'Generally, there are remarkably few people born who have a new thought, who are capable, if only slightly, of saying anything new.'

Watch this movie instead of reading Dostoyevsky's novel, and you'll still fail the exam. This movie fails, too.

There are no featured audience reviews yet. Click the link below to see what others say about Crime & Punishment in Suburbia!