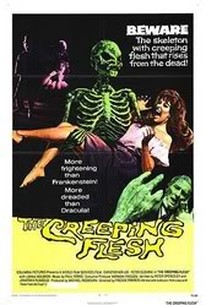 Peter Cushing delivers one of his finest hand-wringing performances as Emmanuel Hildern, a Victorian man of science who relates a mad tale of horror to his half-brother and professional rival James (Christopher Lee). His tale begins with the discovery of the weird skeletal remains of a large unknown humanoid in Papua, new Guinea, which he carts back to England for study. Even more unusual than the skeleton's ghastly appearance is its ability to grow new flesh when moistened with water. Further research reveals that the creature may actually be instilled with the very essence of malevolence (basically freeze-dried, instant evil), indicating that it would be best kept out of the rain. Despite an incongruous subplot involving the doctor's insane daughter, whom he believes can be cured by injections of serum derived from the creature's reanimated tissue, this is an effectively creepy period piece with heady Gothic atmosphere (and a neat twist ending) that ranks among director Freddie Francis's finest work. ~ Cavett Binion, Rovi

This 'Flesh' has little a-peel.

Tepid horror with two British icons as its only draw.

Peter Cushing in a hand-wringing performance is Professor Emmanuel Hildern.

Under rated Hammer horror, with a nice twist at the end.