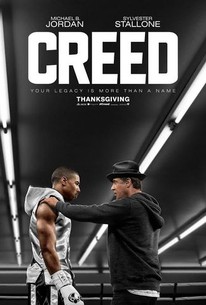 Critics Consensus: Creed brings the Rocky franchise off the mat for a surprisingly effective seventh round that extends the boxer's saga in interesting new directions while staying true to its classic predecessors' roots.

Critics Consensus: Creed brings the Rocky franchise off the mat for a surprisingly effective seventh round that extends the boxer's saga in interesting new directions while staying true to its classic predecessors' roots.

Critic Consensus: Creed brings the Rocky franchise off the mat for a surprisingly effective seventh round that extends the boxer's saga in interesting new directions while staying true to its classic predecessors' roots.

Adonis Johnson Creed (Michael B. Jordan), the son of former heavyweight champion Apollo Creed, attempts to follow in his father's footsteps and become a boxing legend in his own right. Apollo died in the ring in the 1980s at the hand of Russian pugilist Ivan Drago, forcing Adonis to grow up without his dad in his life. The young man travels to Philadelphia to find his late father's nemesis-turned-best friend, Rocky Balboa (Sylvester Stallone), in order to recruit him as a trainer. Balboa soon takes the young Creed under his wing and helps him get in shape for a shot at the title. Ryan Coogler directs this spin-off of the hugely successful Rocky franchise.

Michael B. Jordan
as Adonis Johnson

Elvis Grant
as Himself

Max Kellerman
as Himself

Jim Lampley
as Himself

Michael Buffer
as Himself

Michael Wilbon
as Himself

Tony Kornheiser
as Himself

Hannah Storm
as Herself

Will Blagrove
as James

12 TV- and Movie-Inspired Video Games for the Holidays
National Board of Review Announces 2017 Award Winners
Creed, Paddington, and More Available to Stream on Netflix and Amazon Prime

Creed is a sure-fire hit that's impossible to hate but I may have to punch the next person who tells me it made them cry.

A shot of box-fresh blood.

If you can stomach the schmaltz and suspend your disbelief in the face of the film's pounding predictability, you'll find plenty to enjoy.

It's a relief to watch this likable boxing picture, which finds a way to evolve the Rocky franchise with humour and humility.

Anyone hoping the franchise might open out into new thematic territory will be disappointed; this is the same old ritual, from the amped-up training sequences to the climactic title fight with its absurd number of punches landed in every round.

Creed moves the Rocky franchise into the present and gives it a future; Coogler makes the story his own, even as he pays respect to what has gone before.

Cynics could easily latch on to the problems above and dismiss CREED as franchise smelling salts. To do so, however, would be to also dismiss the new talent Coogler and Jordan bring to the creaking joints of the ROCKY brand.

We're lucky to have Creed. With most franchises, the seventh installment wouldn't even be in theaters, much less worth a damn.

Placing focus on the young Creed allows Jordan to breathe his youthful talents into the film. He successfully carries the weight of being the main focal point.

Creed goes the distance and then some.

[Ryan] Coogler proves to be a great action director with his close, seamless fight shots, while capturing uncheesy sports montages and intimate interactions.

'Creed' is not a novelty, but it is different enough from the first installment of the franchise. [Full Review in Spanish]

Ryan Coogler does an amazing job telling a story that may be too familiar in terms of structure but echoes beautifully Rocky Balboa's life, benefiting from the relationship that grows between him and Apollo Creed's son and with Stallone in another wonderful, sensitive performance.

After the last Rocky film was already pretty strong this is another example of sequels not necessarily being pointless nostalgia but in best case adding new layers to a franchise. Sure, we have the usual ingredients of boxer films here as well, that's a tad predictable. But it's all so well done and performed, especially by Stallone, that you're glad you're along for the ride. The music is another great feature, both referencing the classic Rocky scores and going new ways. A very satisfying and enthralling new installment.

Adonis Creed, the son of Apollo Creed, employs Rocky Balboa to prepare for a big fight. The plot is derivative and maybe even cliche and a important character development isn't adequately resolved, but damn, is this film compelling. The fight scenes are brutal, and Sylvester Stallone turns in the best performance of his career. The scene in which he receives and accepts bad news, which I won't reveal, is heart-breaking; what is Sylvester Stallone doing making me feel things? Michael B. Jordan is a serviceable protagonist, so it's really Stallone that carries this film. Overall, almost despite myself, I really enjoyed this film.