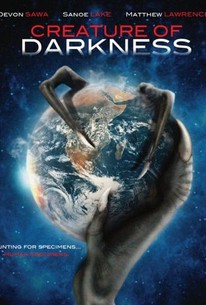 A group of off-road enthusiasts battle an evil alien during a weekend trip into the wilderness. Ever since he was a young boy, Andrew feared he would be killed by a visitor from the stars. Convinced by his pal that the only way of overcoming his fear is to confront it, Andrew joins a small group of friends for a wild weekend of motorsports mayhem in the country. When the alien shows up and Andrews worst fear comes true, the time comes to stand up and fight back against his extraterrestrial tormentor.

There are no critic reviews yet for Creature of Darkness (Hunter's Moon). Keep checking Rotten Tomatoes for updates!

This film has "B-Movie" written all over it. The special effects were way too cheesy and they could've done a lot better. The alien looked great, they justed needed to add some more design to it. The acting was pretty bland. Very unrealistic with a plot and scenes that make no sense what so ever. But that's what make's a Sci-Fi B - Movie good. A B - Movie Sci-Fi Classic.

at least there were boobs