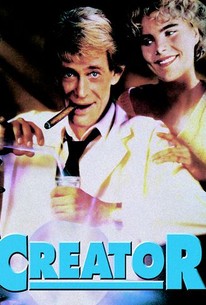 This romantic, melancholy twist on the Frankenstein formula stars Peter O'Toole as Professor Harry Wolper, a lonely eccentric who has dedicated decades of research to cloning his long-dead wife Lucy from a culture of living tissue. To this end, he enlists the services of likeable Graduate assistant Boris (Vincent Spano), who is initially baffled by the professor's endless rants about God, Science and "The Big Picture." After Wolper posts bills seeking a human egg donor, his wish is granted by the vivacious young Meli (Mariel Hemingway), in whom the professor soon discovers a more willing convert to his grand design... and perhaps a love more immediate and real than the one he lost. Boris eventually manages to come around to "The Big Picture" himself when Wolper points him in the direction of another graduate, Barbara (Virginia Madsen). Despite opting for a platonic relationship to better determine if they are ideally matched, Boris and Barbara soon fall deeply in love, realizing that they are soul-mates as the professor had predicted. Tragedy strikes, however, when a brain hemorrhage renders Barbara comatose, and Wolper's nemesis Dr. Sid Kuhlenbeck (David Ogden Stiers) persuades the university to shut down Harry's private cloning laboratory. Meli forces Wolper to choose between her love and his misplaced longing for his dead wife... and his answer is suddenly made clear when he witnesses Boris's heartfelt determination to bring his own true love back to the land of the living. Written by Jeremy Leven (based on his own novel), this is a flawed but engaging comedy which proves that a well-written story can incorporate traditional science fiction elements as more than a mere plot device and actually enhance the humanity of the characters.

Eve McVeagh
as Woman with Monkey

Michael Greene
as Guard
View All

How did a movie this mindlessly saccharine ever get made?

Creator is ambitious and tries to do a lot of things and does most of them well, but it's a close miss.

Creator is a refreshingly intelligent movie.

Peter O'Toole's madcap performance is a wonder to behold.

O'Toole makes it passable, but he's better than this and so is the audience.

Creator is a better film than its reputation thanks to a fine performance by Peter O'Toole and a good supporting cast including a young Virginia Madsen, Vincent Spano and David Ogden Stiers. The film has its flaws, but is good-natured and often funny if too often sentimental. The plot is actually quite clever for the mid-80's - Peter O'Toole has been cultivating his dead wife's cells for 30 years until technology allows him to recreate her using the fertilized egg of a another woman. It feels just plausible enough to be compelling, and we do wonder if Dr. Wolper will pull it off. O'Toole looks and is cast in a role of a much older man (he was 53 at the time), but his charm and charisma make this worthwhile despite its flaws.