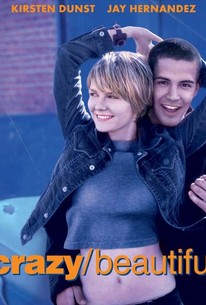 Critics Consensus: The story is not new, but the film gets credit for trying to move away from the genre's cliches. Kirsten Dunst and newcomer Jay Hernandez give believable performances.

Critics Consensus: The story is not new, but the film gets credit for trying to move away from the genre's cliches. Kirsten Dunst and newcomer Jay Hernandez give believable performances.

Critic Consensus: The story is not new, but the film gets credit for trying to move away from the genre's cliches. Kirsten Dunst and newcomer Jay Hernandez give believable performances.

The +Romeo and Juliet story has been modernized to a high school setting previously, but this romance from director John Stockwell turns the tale inside out. Jay Hernandez stars as Carlos Nunez, a poor but athletically gifted Latino teenager who endures a two-hour bus ride every day from East L.A. to attend the posh, wealthy Pacific Palisades High School in Los Angeles on a football scholarship. A straight-A student, Carlos is focused and driven, but his future is cast in doubt when he becomes the flirtation target of spoiled, self-destructive bad girl Nicole Oakley (Kirsten Dunst), who's the daughter of a prominent congressman (Bruce Davison). When his friends, family, and even Nicole's own father oppose the romance for Carlos' sake, he chooses to ignore their advice and stubbornly pursues his relationship with Nicole, whose feelings grow from simple physical attraction to something much deeper. Crazy/beautiful is directed by writer, actor, and director John Stockwell, who also penned the same year's Rock Star.

Neil Looy
as Jimmy the Pilot

Hank Mendoza
as Guy on Street

As overproduced as a Super Bowl soft-drink commercial, so much so that even its potentially insightful moments seem like movie fakery.

Dunst, in her finest performance yet, has now transcended her fellow teen stars.

The movie is so predictable, it's not surprising that the script is credited to first-timers Phil Hay and Matt Manfredi, and the direction to John Stockwell, a former acting peer to Tom Cruise.

Sure, the Romeo-and-Juliet thing has been done before, but director John Stockwell pulls it off with his two promising leads.

Even when the movie is bad -- which it is in its abrupt, mismanaged, final-act attempt to cram in moments of forgiveness and clarity -- it's addictively so.

There is nothing new in this teen fantasy.

This movie is godawful. Simply godawful.

Has a typical, write-by-the-numbers plot, about as predictable as they come and almost that interesting.

The effect is a much more engrossing experience than we have come to expect from teen movies.

The movie's dramatic moments come from dialogue not actions, and much of the time viewers are left on their own to fill in the words that remain unspoken.

Kirsten Dunst were so different and so young in this movie. The story is pretty much very ordinary. However, the directing and acting was great. It also leave out the racial differences between the couple. Touching movie about how a girl wanted to be loved and accepted in her environment, especially family wise. Romance movie that is realistic and also touches the family part, where in many romantic movies it haven't seen as an important matter.

I love this movie. Had not seen it in a few years, but like it just as much now as I did the first time I watched it. Definitely a very different role for Kirsten Durst at the time. (Not including Virgin Suicides - but still in that she was the glamourous and pretty girl). She is very played down through most of it, with greasy hair and no make up, as she plays a troubled, suicidal teen. Still attractive, of course, but there is a flatness to her (deliberately), that she does not normally have. At heart this is just a nice film about acceptance and being understood.

Well-constructed and credibly played characters fuel this high-school romance, which involves a scholastically dedicated Latino guy who loses his academic focus after falling in love with the deeply troubled WASP daughter of a wealthy congressman. The fairy-tale conclusion is a bit too pat, but two leads generate a lot of goodwill along the way.

OMG, Jay Hernandez is so hot.