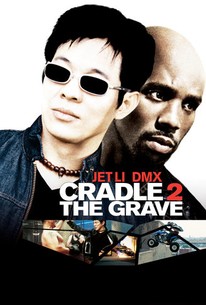 A thief and a lawman join forces to hunt down a common enemy in this action thriller. Tony Fait (DMX) is a master thief who, along with his crew (Gabrielle Union, Anthony Anderson, and Drag-On), pulls off a major score when they steal a cache of highly valuable black diamonds. However, the hard-as-nails Tony has a soft spot for his young daughter Vanessa (Paige Hurd), and Ling (Mark Dacascos), a former detective turned ruthless criminal, kidnaps Vanessa, demanding a ransom from Tony for her return -- the stash of black diamonds. The jewels have already been stolen, however, from Tony's fence Archie (Tom Arnold), and are now in the hands of a powerful underworld boss (Chi McBride). Determined to get back his daughter whatever the cost, Tony and his gang set out to find both Ling and the diamonds, but he soon gets some invaluable help from an unlikely corner -- Su (Jet Li), a government agent from Taiwan who was once Ling's partner, and has an old score to settle with him. Cradle 2 the Grave also features Kelly Hu and Roxana Brusso.

Randy Couture
as Fighter No. 8

Larry Joshua
as Cop In Vault

News & Interviews for Cradle 2 the Grave

View All Cradle 2 the Grave News

Critic Reviews for Cradle 2 the Grave

[DMX] acts like he raps -- in fits and starts, with heaps of ruff growling. Li barely has enough lines to qualify for a SAG card.

This is just a horrible film, waste of time. Please, please avoid it.

If all this leaves viewers more drained than exhilarated, that's the nature of this particular beast.

A secondhand action movie that retreads all the tired staples of the 1980s and '90s.

It's saying something when Tom Arnold's performance is among the movie's highlights.

In Cradle 2 the Grave, producer Joel Silver returns with gusto to the mix of martial arts action and urban attitude that proved so potent in Romeo Must Die.

While it aspires to be cinematic junk food, the picture is relentlessly moronic, eschewing B-movie thrills to wallow in Z-movie production achievements.

A mess. Don't try to make it make sense.

When the film features a steel cage brawl between Li and a gaggle of Ultimate Fighting Champions, an ATV chase with DMX, and a kick-ass girlfight between Kelly Hu and Gabrielle Union, enduring the dreck is a relatively small price to pay.

Absurdity is one of Cradle 2 the Grave's two fatal flaws. The other is predictability.

You'll have to check your brain at the door, but as long as you remember to pick it up on the way out, you should be fine.

Cradle 2 the Grave will rock you into a deadly stupor.

Audience Reviews for Cradle 2 the Grave

It may boast more conventional action sequences and Jet Li's combative performance, but Cradle 2 the Grave is just another simplistic and poignant creation. The film still possess the dull dialogue, chemistry and script that is accustomed to previous Bartkowiak/Silver pictures. 3/5

Even when I first saw this, I felt it kind of hard to buy that a common thief and an Asian law enforcment officer would team up to fight a common enem, but there you go. I guess they felt they needed to give this some kind of plot, no matter how loose or ridiculous to hang a bunch of over the top action scenes and violence on. They could have come up with something far better than this though, that's for sure. This film isn't really boring, but there's nothing really exciting going on, either. The acting is hammy, and as bad as the writing and directing. I guess some of the fights are cool, but, like I said, nothing to really get excited about. This is far from good, but I've seen worse, so I guess that's a bit of praise I can give it. I don't recommend this though. Not at all.

This movie is like Rush Hour without the comedy. Good action movie. Jet is a cop from Taiwan who has come to the US to retrieve black diamonds that were stolen from Taiwan. DMX is a thief who robs the diamonds from the baddy, who then kidnaps his daughter. Jet and DMX have to work together to get back what they both want.