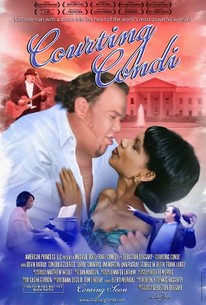 One man's misguided crush kicks off an investigation into one of the most powerful women in the world in a film the producers call the first "Musical Docu-Tragi-Comedy." Devin Ratray is best known to most folks as Buzz, the cranky sibling in the Home Alone movies, but as an adult Ratray has continued to act while devoting himself to a career in music, playing guitar in a hard rock band. However, Ratray is also a man in love -- he's developed a powerful infatuation with Condoleeza Rice, the former U.S. Secretary of State. After years of worshiping Rice from afar, Ratray has decided it's time he did something about wooing the conservative icon, and he's decided to map out a game plan to meet her and win her heart. Ratray begins by learning everything he can about her, and his pal Sebastian Doggart decides to help with his research by making a film about Ratray's quest. After discovering Rice is an accomplished classical pianist, he decides to brush up on his keyboard skills and enlists a number of collaborators to write love songs for Condi. Ratray also decides to find out more about the woman behind the gap-toothed smile, but the more people he talks to about Rice, the more the facts paints a picture of a woman determined to use all her talents and every advantage he could muster in a bid for political power. Courting Condi received the Jury Award for "Most Creative Concept" at the 2008 Ft. Lauderdale International Film Festival.

This first-ever musical docu-tragi-comedy is a highly creative piece of filmmaking. Opinionated? Yes, but it's also a lot of fun and quite provocative.

A unique film. On the one hand, this is a silly musical comedy and mock documentary. On the other hand, it is also a serious documentary about a woman who seems to have sold her soul for power.

There are no featured reviews for Courting Condi at this time.