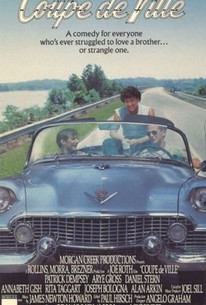 Three rebellious bickersome brothers reunite to drive their father's title car from their Detroit homes to Florida. The auto is to be a gift to celebrate their mother's birthday party. Along the way, their adventures are punctuated by pop tunes from 1963 that include "Louie, Louie," a song that inspires a hilarious debate as the three attempt to fathom the song's meaning.

There is something deadening about the kind of formula picture where you know with absolute certainty what is going to happen, and how, and why.

Three brothers who couldn't be more different from each other are tasked by their Father, to drive a Coupe de Ville from Michigan to Florida so they can surprise their Mother with the car as a gift for her birthday. But trouble ensues when the fighting starts from the very start of the trip. Along the way they have run-ins with the Cops and all sorts of characters as they bicker and fight across state lines on their way home. It is through all the madness that they realize the love they have for each other, and that they need to come together as a family because as they will find out, nothing is more important than your family and the time you have with them. Really enjoyed the movie and the performances of the film's three leads: Patrick Dempsey, Daniel Stern, and Arye Gross. Which in my opinion may be one of the greatest casting decisions ever, they played off of each other very well and made the movie that much more engaging and entertaining. A very heartfelt movie and a lot of fun to watch.