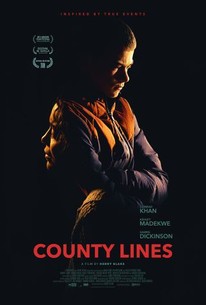 Tyler Hughes, aged 14, has the weight of the world on his shoulders. He attends a Pupil Referral Unit (PRU) in East London where he is bullied by his brutish classmates. At home he cares for his younger sister while his mother, Toni, who works nights, is neglectful and preoccupied. One day, Tyler is rescued from bullies by Simon - a "recruiter" who targets and grooms vulnerable children to promote his drug dealing enterprise out of town. Simon's allure is strong for Tyler, who quickly finds himself working for Simon, running "County Lines" trips out of town and completely out of his depth. At home his mother chooses not to question the source of the cash Tyler starts to bring home, as she has lost her job and is in dire need of it. Events escalate as Tyler becomes increasingly brutalised and damaged by the world he has been sucked into, and estranged from his mother and sister. Matters come to a head when Tyler is sent by Simon out of town, savagely attacked by a rival gang, his drugs and money stolen, and left for dead in a remote marshland. Soon after Simon comes knocking at Toni's door in search of compensation, threatening her and her daughter. Toni is now fully awake to the horrors her son has been victim to, she finds her strength and resolves to rescue him from it. Tyler's wounds eventually heal but he remains deeply traumatised. Toni's support helps Tyler break through and the family finally comes together. The film highlights the growing national crisis of 'County Lines' and the serious threat it poses to Britain's children. Writer/director Henry Blake has been working with survivors of this phenomenon for a number of years and the film is inspired by the stories he has come across.

County Lines serves to offer an unfeigned portrait of a problem plaguing Britain's towns and cities with troubling regularity. As an urgent outcry, it's potent. As a debut film, it's astounding.

The dialogue is more on-the-nose than the direction but the performances are persuasive and, as it lays bare an inhumane issue in unflashy and compassionate style, this is a valiant attempt to bring a stomach-churning subject to the fore.

Combining a vivid, empathetic approach to his working-class characters and milieu, a good eye and a thriller master's ability to unsettle, Blake offers up a short, sharp jab to the national conscience.

There are no featured reviews for County Lines at this time.