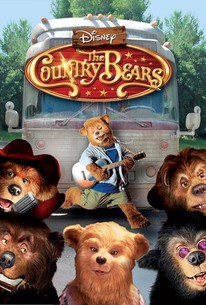 Critics Consensus: Despite all the celebrities on hand, this spin-off from a theme park attraction still feels tired and hokey.

Critics Consensus: Despite all the celebrities on hand, this spin-off from a theme park attraction still feels tired and hokey.

Critic Consensus: Despite all the celebrities on hand, this spin-off from a theme park attraction still feels tired and hokey.

Like other celebrated rock-and-roll groups, the members of the legendary group 'The Country Bears'--Ted and Fred Bedderhead, Tennessee O'Neal and Zeb Zober--were torn apart by the perils of their own success: ego, jealousy and a little too much honey. Can eager young fan Beary Barrington convince the bitter ex-members of the rock band to put aside their differences and perform a benefit concert to save Country Baer Hall, the legendary venue where the band got its start?

Krystal Harris
as Herself

Don Henley
as Himself

Daryl 'Chill' Mitchell
as Off. Hamm

Wyclef Jean
as Himself

Elton John
as Himself

Willie Nelson
as Himself

Bonnie Raitt
as Herself

Brian Setzer
as Himself

Don Was
as Himself

News & Interviews for The Country Bears

2005 Oscar Nominations Are In!
Justin Long is "Accepted" by Universal

View All The Country Bears News

Critic Reviews for The Country Bears

It's mildly amusing, but I certainly can't recommend it.

This ingrown mutant is easily the most bizarre children's film made in this country since 1982's lab-rat apocalypse The Secret of NIMH.

Pic as a whole is a gently and genuinely amusing treat that should bring smiles to target auds.

If you're looking to take your children to something harmless, that doesn't embarrass anyone, this light comedy ... is your next outing.

So awkward, so leaden, so virtually laugh-free that it's guaranteed to bring down the Happy Meals it's being marketed with.

It's just that it's so generally mediocre, bland and predictable that I found myself moaning every time I looked at my watch, which was often.

Despite the superior technical skill and stellar cast, this is not a concept that cries for 90 minutes of screen time.

A dumb story about a bear adopted by humans.

...the movie just might be worth a rental if only for the sight of watching Christopher Walken belt out a musical number using only his hand and his armpit.

It's like an all-star salute to Disney's cheesy commercialism.

Audience Reviews for The Country Bears

For a kid's movie, this was actually decent. The bears are cute and the story is okay. One of the few kids films I have seen that hasn't made me want to pull my hair out just for something else to do!

It was fun to see another Disney ride brought to life, but this was in no way a good movie. It was extremely corny and had an overused plot. It would've been better as an animated movie, because the Disneyland attraction is about singing bears.

i thought this was well good lol!