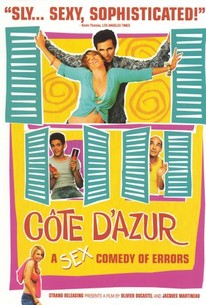 Critics Consensus: This listless, albeit sexually charged, French farce is too lightweight to make any impact despite its whimsical qualities.

Critics Consensus: This listless, albeit sexually charged, French farce is too lightweight to make any impact despite its whimsical qualities.

Critic Consensus: This listless, albeit sexually charged, French farce is too lightweight to make any impact despite its whimsical qualities.

It's Summer Rental meets Blame it on Rio when a French family heads off to the Mediterranean for a sultry summer vacation in the ensemble sex comedy Côte d'Azur, co-directed by Jacques Martineau and Olivier Ducastel (The Adventures of Felix). When the head of the clan, Marc (Gilbert Melki), decides to tote his wife, Béatrix (Valeria Bruni-Tedeschi), and his teenage children Laura (Sabrina Seyvecou) and Charly (Romain Torres) off to his childhood beach home on the Riviera, a number of sexy liasons ensue. Charly -- though straight -- must contend with the come-ons of his best friend, Martin, a closeted homosexual infatuated with him for years but too shy to say so. Meanwhile, as Laura takes up with a young biker, Béatrix re-encounters her old boyfriend Mathieu (Jacques Bonnaffé); Marc's ex-flame pops up, too, both former lovers expressing interest in rekindling affairs. Soon, the entire vacation becomes a surfeit of hilarious erotic complications.

As flippant vaudeville-style comedies go, Cote d'Azur is rather weak.

While Cote d'Azur should be a vacation, it's often more like work just trying to stay engaged.

It's a diversion at best and a strained souffle at worst, but it rings enough Gallic changes on the old family-summer- gone-horribly- wrong genre to deliver some unexpectedly sharp laughs.

Sexually brazen yet also rather sweet.

There's no denying the appeal of well-toned half-naked bodies, a sun soaked Mediterranean beach, and -- musical numbers extolling the aphrodisiac qualities of shellfish?

Works well so long as it is approached as a tongue-in-cheek farce as opposed to a plausible melodrama.

Delights and surprises, a combo that is important to many audiences.

a funny, sexy, and very French diversion that's as weightless as a Mediterranean breeze.

If anything, the film is proof that a European sex comedy can be just as boring as your run-of-the-mill comedy if the writing isn't up to snuff.

This is the forth movie Olivier Ducastel and Jacques Martineau did together... and they made a real summer movie about husband and wife - Marc (Melki) and Béatrix (Tedeschi)- who take their two kids to the seaside house of Marc's youth. Not much of the family atmosphere though: their daughter takes up with a biker and their son roams the beach with his best friend, who is in love with him. Things get steamier when Béatrix's lover Mathieu shows up, and Marc's old flame appears... The best part of this movie is Valeria Bruni Tedeschi! WOW!

[font=Century Gothic]"Cote d'Azur" takes place while a family is on vacation in the south of France. Beatrix and Marc are parents of two teenaged children. The daughter, Laura, is off to Portugal with a biker.(Every parent's worse nightmare - the biker part not Portugal.) Beatrix is okay with this because of her Dutch parentage. The son, Charly, sticks around for his friend Martin to arrive who he has not seen in a year. After some quick observations, Beatrix declares them to be gay lovers.(She's half right.) Again she is perfectly fine with this, even if her husband is a little perturbed. The next person to make an appearance is Beatrix's lover. Complications ensue.[/font] [font=Century Gothic][/font] [font=Century Gothic]"Cote d'Azur" is a mildly amusing French sex farce that preaches tolerance. It does have a rather old-fashioned feel to it with an occasional dash of irreverence thrown in. The performances are good and the situations are believable with one major contrivance.[/font]