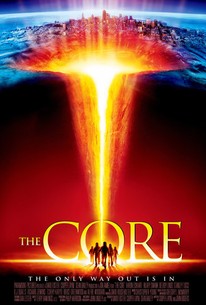 Critics Consensus: A B-movie with its tongue planted firmly in cheek, The Core is so unintentionally (intentionally?) bad that it's a hoot.

Critics Consensus: A B-movie with its tongue planted firmly in cheek, The Core is so unintentionally (intentionally?) bad that it's a hoot.

Critic Consensus: A B-movie with its tongue planted firmly in cheek, The Core is so unintentionally (intentionally?) bad that it's a hoot.

An unlikely band of scientists and soldiers join forces to save the world from certain destruction in this action-drama. As the world is struck with a variety of inexplicable phenomena -- attacks by enormous swarms of birds in London, the explosion of the Colosseum in Rome, a potentially deadly malfunction which forces the Space Shuttle into a Los Angeles riverbed, and the simultaneous deaths of 32 people with pacemakers in Boston -- a team of top scientific minds from around the globe is assembled to determine what has thrown the world into such a frenzy. Dr. John Keyes (Aaron Eckhart) makes the startling discovery that the Earth's electromagnetic forces have begun to collapse, thanks to a sudden lack of movement of the molten ore at the center of the Earth. If the planet is to be saved, the core of the Earth needs a jump start, and Keyes assembles a team to burrow to the center of the planet and bomb the insides back into action. Joining Keyes on this dangerous, last-chance mission are the brilliant but arrogant Conrad Zimsky (Stanley Tucci), French arms expert Dr. Serge Levesque (Tchéky Karyo, maverick researcher "Brazz" Brazzleton (Delroy Lindo), geeky computer genius Rat (DJ Qualls), and two no-nonsense military types, Commander Richard Iverson (Bruce Greenwood) and Major Rebecca Childs (Hilary Swank). However, as the crew digs deeper into the Earth, the more they discover what they haven't been told about their mission and what's really been causing the worldwide chaos. The Core was originally scheduled for release in the fall of 2002, but the movie didn't reach theaters until the spring of 2003 as special-effects experts perfected the film's more spectacular scenes.

Shawn Green
as Himself

Gregg Bennett
as Technician, Virgil Base

Greg Bennett
as Virgil Base Technician

News & Interviews for The Core

View All The Core News

Critic Reviews for The Core

[I]t's not campy enough to be consistently entertaining, and it's certainly not exciting or smart enough to be a first-rate sci-fi epic like a Deep Impact.

Jules Verne this isn't, but it makes for fairly diverting escapist fare.

There's a marked absence of panic in The Core.

Scientists may shudder, but at least some good actors are getting work.

The Core works because the characters are idiosyncratic enough to seem authentic but not so zany that they seem contrived.

A production that... as soon as it has been consumed... is forgotten. [Full Review in Spanish]

A magical film: it never runs out of new and delightful ways to be completely inane.

This is a big, dumb, explosion movie.

'The only truly interesting aspect found in "The Core" is Jon Amiel's thoughts as to what the inner parts of Earth might look like.'

If something isn't done soon, the earth as we know it (love that cliché) will destroy itself. Who do you call? Core busters!

Audience Reviews for The Core

This is a guilty pleasure kind of movie. I love disaster films and although this one is nowhere near excellent, I have still watched it and enjoyed it a few times.

I dunno why but I do like this disaster film, yes its totally stupid, totally unrealistic and completely along the lines of 'Armageddon' under the earth but to hell with it! its a fun ride. Part of this is down to the likeable cast of science bods for me. Eckhart has always kinda been the bigger version of Scott Bakula in my humble view, a nice guy with floppy hair, Karyon and Lindo are both solid as always and Tucci is fully enjoyable as the whiny scrawny egghead who will obviously kick the bucket. Only downside is the Justin Bieber lookalike Swank who is just too damn wholesome and American to stand for so long. The film is simply fun from the get go really, your typical disaster scenes across the world, the cool ideas the film makers came up with for the earth's interior, it really does feel like an updated 'Journey to the Centre of the Earth' when the crew break into a huge geode which then begins to leak lava. I think the creative team did well with whats shown as the crew progress deeper, I'm sure its scientifically wrong but it looks cool. As you near the climax the plot does get a little more emotional as members fall by the wayside one by one much like all disaster flicks do. This does keep you glued to the screen somewhat, its very predictable but you wanna see it through. In the back of your mind you know who's gonna die and who's gonna survive, but like I said its highly predictable. I think the plot is well worked in this film, it seems like an impossible task but the theories of how you could actually jump start the center of the earth are clever I guess. You know its not real but it looks and sounds like it could be. I also liked the craft design they use, the spacesuit-esque designs and all the science guff they babble when the heat is on (no pun intended). A shame the ending is so flat but it beats the over blown all American showboating you got in 'Armageddon'.

The Core is one perfect example of a terrible film that should've never been made. What's stunning about this film is that it has a good cast of talented actor, aside from D.J. Qualis, who was always a terrible actor. I can't believe the amount of really good actors who acted in this pile of junk. The film is yet another "save the world" type of film and is focused on reigniting the earth's core. However, the films plot is so poorly conceived that you lose interest in watching the film, and wonder why you even bothered with the film in the first place. This cast cannot save the world or this film for that matter, and when you have a seventeen year old as the head of the operation, you know you have a really bad film in the can. This film fails as a disaster film and as an action movie. When I originally saw this at the time of its release, this was the worst that I had seen. The Core has a great cast of talented actors, but even that doesn't save this lacking, and mediocre story. This is one of the worst action films that has come out of Hollywood, and really makes the disaster genre an irrelevant bad joke. This is a film that should be avoided. The great cast is wasted here, and they shouldn't have ever made this stupid, ridiculous.

Action/adventure sci-fi about an intrepid team of scientists who must journey to the center of the earth in order to save the world. I wonder what can happen? Summer movie fun.