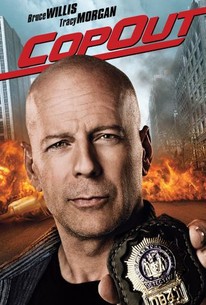 Critics Consensus: Cop Out is a cliched buddy action/comedy that suffers from stale gags and slack pacing.

Critics Consensus: Cop Out is a cliched buddy action/comedy that suffers from stale gags and slack pacing.

Critic Consensus: Cop Out is a cliched buddy action/comedy that suffers from stale gags and slack pacing.

Bruce Willis and Tracy Morgan team up for the Warner Bros. police buddy movie Cop Out in this Kevin Smith-directed production. From a script by Robb and Mark Cullen, the story centers around police detectives Jimmy (Willis), a no-B.S. divorced dad, and Paul (Morgan), a crazy-talking loose cannon. Despite nine years as partners, the two lawmen can still sometimes seem like polar opposites -- especially when Paul's unpredictable antics get them suspended without pay. Already strapped for cash and trying to pay for his daughter's wedding, Jimmy decides to sell a rare baseball card that's worth tens of thousands. Unfortunately, when the collector's shop is robbed and the card vanishes with the crook, Paul and Jimmy end up going rogue, tracking down the card and the drug ring behind its theft, all on their own time, and without any backup -- except for each other. ~ Cammila Collar, Rovi

Michael Pitt
as Henry, the Neighbor

Michael A. Pitt
as Henry, the Neighbor
View All

News & Interviews for Cop Out

Critics Consensus: Your Badge and Gun, Cop Out
Friday Harvest: Cop Out, The Crazies, and more!

View All Cop Out News

Critic Reviews for Cop Out

It could have been a match made in heaven. The snake in the garden is a tired script from Rob and Mark Cullen, which purports to "spoof" Eighties buddy movies (Beverly Hills Cop, Lethal Weapon, etc) but lacks any real brain power of its own.

It's just not very funny -- despite the all-too-apparent struggle to deliver verbal fireworks, there's something immovably sluggish and inert about it.

Whilst Smith uses crash zooms and slow motion to evoke the likes of Michael Bay, it just feels clumsy and drawn-out.

Director Kevin Smith capitalizes on the duo's great chemistry and gets laugh-out-loud performances from Morgan as a bag of insecurities (not far from his 30 Rock role) and Willis as the stoic macho man.

A terrible excuse of a "buddy cop" movie. [Full review in Spanish].

In all, though, Cop Out is not much cop.

Smith's love of long takes where people talk about nothing in particular just isn't right for this movie.

Cop Out is marvelously juvenile, not just in its typical situation comedy and sight gags, but from its ability (even desire) to frequently bring its plot to a shuddering halt so its characters can engage in a few minutes of quiet ridiculousness.

Even if many of the jokes in Cop Out aren't all that funny, Smith's facility with crude wordplay is what he salvages from this huge mess of a film.

Audience Reviews for Cop Out

Hmmmm this film tries way too hard to be a cool violent buddy cop flick, well basically the next Lethal Weapon franchise methinks. It falls way short of the mark in all areas to be honest. I didn't really find it funny, it just seemed so forced and to eager to result to bad language to try and make things funnier. There isn't much action, well anything to shout about anyway and well its all been done before but much much better, not even close to 'Beverly Hills Cop', '48 Hours', 'Lethal Weapon' or even 'Red Heat', I could go on. Cast wise Tracy Morgan is basically a fat Chris Tucker and nowhere near as good where as Willis is just Willis as in most of his other action flicks, in my opinion he doesn't do comedy too well mainly because he's a bald plank of wood with a set number of facial expressions. Cop out? yes it is, don't bother, nowhere near Die Hard standards on action and nowhere near the above mentioned buddy cop flick standards on comedy, plus zero originality.

Paul: I'll fuck a little kid up if he punches me in the dick. 'Cop Out' is the "one we do not speak of", according to the many fans of Kevin Smith, who to this date insult this film. I don't particularly agree with these peoples opinions, because I quite liked 'Cop Out'. It's not a masterpiece or anything, but I laughed a whole lot and found the characters reasonably likable. My gripe with this is the plot, which is plain stupid. The whole "Mexican drug dealers" has been done countless times, and while I appreciate some new ideas that Smith incorporated, I couldn't get into this plot. I did like the actors a lot, particularly Morgan and Willis, who produce some pretty great laughs, but the lazy script (not by Smith), brings a lot of the films potential from great to average. However many people bombard 'Cop Out', I still, to this date find it fun to watch, as I'm sure many people do. Read more reviews at www.creedsdelight.com

I feel like I wanted to laugh, but yet it almost felt like Tracy Morgan did most his jokes on a blue screen and Bruce Willis shot his parts in a different part of America. Its was OK.