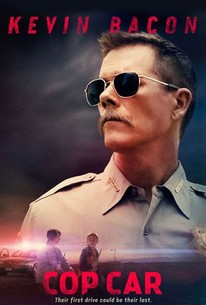 Critics Consensus: Cop Car boasts a terrific premise and a grimly gripping opening act -- and for some viewers, that will be enough to compensate for the movie's uneven denouement.

Critics Consensus: Cop Car boasts a terrific premise and a grimly gripping opening act -- and for some viewers, that will be enough to compensate for the movie's uneven denouement.

Critic Consensus: Cop Car boasts a terrific premise and a grimly gripping opening act -- and for some viewers, that will be enough to compensate for the movie's uneven denouement.

[Cop Car] doesn't offer much in the way of substantial character development, but that's not a deterrent when the fun twists keep coming.

Watts walks us innocents out into the landscape where Hollywood has made its greatest myths and then removes the blindfold.

Anchored by solid performances and a taut script, Cop Car is a tension-filled thrill ride.

Despite the occasional pothole, Cop Car is an arresting ride.

"Cop Car" has two kids at its center, but don't mistake this taut, wicked little thriller for a children's film.

The good thing about the movie is that, with its eighty minutes, it is concise and clear as it develops practically in real time, which almost eliminates unnecessary pauses for exposure. [Full Review in Spanish]

This is a superb piece of film-making: tightly edited, fast-paced and incredibly entertaining.

Watching Cop Car is a piece of cake (that is if you aren't cursed with a weak stomach). It's a taut, propulsive midnight flick that puts its characters through the ringer without getting a speck of dirt on the audience's hands.

With its limited budget, seen in its rural-set locations and single-day narrative, director Jon Watts manages to produce something small and wonderful.

Infused with a youthful energy and a Coen Brothers-esque wit.

Showing as part of the American Dreams strand, Jon Watts's thriller shows how a little imagination can go a long way in compensating for a small budget, with twist piled upon swerve upon handbrake turn.

Cop Car is a film that takes full advantage of the simplicity of its plot. Genuinely entertaining from start to finish.

I have no idea why, perhaps it's the pacing and the structure, but this film's reminds me of last year's excellent Blue Ruin. It's not nearly as good as Blue Ruin, but I'm certainly reminded of it in spirit. Though, honestly, both this and Blue Ruin were more throwback thrillers. The similarities are still apparent however. Though, as I mentioned, Cop Car is never really as good, or as clever, as it thinks it is. Don't get me wrong, it is a good movie with a good concept and execution, but there's just something about the pacing that really threw me off. This is an 84-85 minute movie that feels slightly longer than it actually is. I just don't think there are as many interesting elements going on here to actually justify the running time. And it's not even that long of a movie to begin with. I like the idea of Kevin Bacon's character searching after the people who stole his car and the panic he goes through in thinking that the person in his trunk got out and the relief he feels once he finds out it was actually kids who stole his car. Like that stuff is good, but seeing actually on the hunt for these kids, going to various places, getting different things isn't really particularly good to me. Perhaps 'not good' is the wrong term to use, it just isn't that interesting to me. I honestly kind of zoned out during these scenes, because it felt like a whole bunch of filler. Parts of it are definitely essential, but it's not like all of it was absolutely necessary in order to tell this story. I don't think anyone can really justify it all being there, no matter how much they like the film. It's also lame that the film doesn't really play more with the concept of Bacon's character being on the chase after the boys and the boys themselves knowing it and being afraid of him. The film could've ended the same exact way it did, but you should've removed a lot of the filler and add some more suspense to the film with Bacon's character actively searching and going after the kids with a furious vengeance. Again, the film could've ended the same exact way it did, but it would've felt like a more complete experience. The film also doubles as a coming-of-age film as these two boys pretty much start off the day as two innocent kids running away and they come out of it men with everything they've gone through. One of the things that did bother me about the characterization of the two boys is the fact that they're too innocent for how old they actually are. They do some incredibly stupid things for kids that are 11 or 12 years old in THIS day and age. Perhaps if the film had taken places in the 70s or 80s, it might've been believable, but not in 2015. I'm not saying kids are smarter, but they know more about how the world actually is at that particular age than ever before. So for the kids to be acting so innocently, and stupidly, it really does kind of strain credulity. The acting is good all around, though Shea Whigham pretty much steals the show here. Kevin Bacon is good, but it's not like he excels or does anything to blow your mind. Camryn Manheim is another real good actress, but she, unfortunately, doesn't get to do much here. The kids are quite good and there's certain chemistry between the two that makes it easy to buy into their friendship. They're not great, but they're good together. That's about it really, this is a good movie, but it's one that is very flawed. It's very rough around the edges, so I can't give it a glowing recommendation. It's not something I'd buy unless it was available for very cheap. I'm sure others will like it more than I did, but I just wasn't blown away by this film. It's a solid rental though, nothing more.

Not exactly what I'd call straight forward in tone, and also doesn't really scream "Get this guy to direct a modern-day Breakfast Club inspired Spider-Man film" to me either, but that's not me saying it's a bad little bit of cinema at all, just addressing some confusion on my end.

Coming out of nowhere, Jon Watts (Director) and the child stars (James Freedson-Jackson & Hays Wellford) are all going to be ones to keep an eye on. "Cop Car" follows two kids who find a cop car and get into trouble with the law/crime. Yes, that is as simple as the film is, all the way through, but it is executed so well that it is undeniably impressive. The screenplay and cinematography are what really sell this film for what it is, and the director was able to harness such honest performances from the young leads, that there really are no complaints to be made anywhere. From the score, to the acting, and even to the locations, everything about this picture was pristinely thought out. I may be a sucker for smaller independent films such as this, but this is one that I truly believe everyone should check out. Does it have a big extravagant or twisty ending to keep you enthralled? No, and does it need it? Absolutely not. This film is great for what it is. My one gripe, which is kind of a big one, is the way the writers chose to wrap up a certain storyline. It happens so abrupt and then the film is over. I would have liked to see it play out a little more, as would most viewers, I assume. Everything about this picture is great, but it is almost too simple to warrant a critical praise. It is a very easy watch that I highly recommend. "Cop Car" is great!