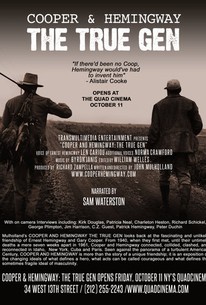 On paper, the friendship between these two celebrated American icons would seem to have been impossible. But Coop and "papa" became the best of friends, right up until their deaths several weeks apart in 1961. Today, 50 years after their deaths, the intriguing and at times contentious friends which roamed from Idaho and New York to Cuba and Paris -- resonates on fascinating and diverse levels. And as the the extraordinary popularity of "Saving Private Ryan" proved. Americans are fond of looking back to another time to understand what real heroism is, to come to grips with what courage means. Ernest Hemingway and Gary Cooper dealts with this very subject. as no one had before, as has since Hemingway's fiction and Cooper's persona was not about masculinity as a one note, smash mouth force of nature; rather, it was about the self-respect that comes from comporting oneself with courage In the impossible circumstances. (c) Official Site

Critic Reviews for Cooper and Hemingway: The True Gen

The overall effect here is of parallel biographies juiced to feel important whenever they intersect, and an undercooked paean to lost masculinity.

Their work endures, and so does what they stood for.

Cooper and Hemingway remain fascinating even if their machismo evokes a distant and depressing past.

There are no featured reviews for Cooper and Hemingway: The True Gen at this time.