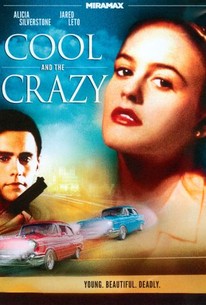 A young, married mother gets in over her head when she has an affair in this made-for-TV movie. Alicia Silverstone stars as Roslyn, a young mother who married her high school sweetheart (Jared Leto). She gets more than just excitement though when she accepts the nudging from a friend and has a fling with tough guy Matthew Flint. The film is a remake of the 1958 film of the same name.

John Kapelos
as The Greek

Critic Reviews for Cool and the Crazy

When you're watching a movie and you really can't tell if it's a straight drama or a broad farce, you're probably dealing with a bad movie.

Audience Reviews for Cool and the Crazy

Alicia & JKared are cute together. The perills of what happens when you get married 'too' young(might)

Cool and the Crazy Quotes