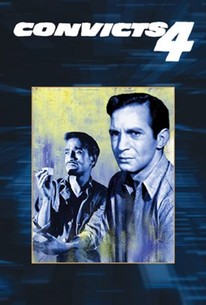 Based on the autobiography of convicted killer John Resko (played here by Ben Gazzara), this routine biographical drama looks at the crucial years between 1931 and 1949 in the convict's life. That period begins when Resko is convicted of killing a store owner and is sentenced to life in prison. After his arrival in prison Resko eventually gets involved in creating art, an activity that leads to a transformation in his character. That change became evident enough to garner the attention of the powers-that-be and by 1949, Resko receives a pardon. The prison system is shown as improving between the killer's first internment and his release, which in itself might make some viewers wonder what happened then, in the years between 1949 and the present. ~ Eleanor Mannikka, Rovi

There are no critic reviews yet for Convicts 4. Keep checking Rotten Tomatoes for updates!

I just watched a block of prison movies on TCM & they were either OK or straight up sucked so when I got to Convicts 4, I really wasn't expecting all that much.Convicts 4 was the last movie on the block so I guess TCM saved the best for last.It was a pretty decent movie & I didn't know it was based on an autobiography until I read it on another site but I think that's what made it better then the others.It was based on an actual person & not just a prison movie