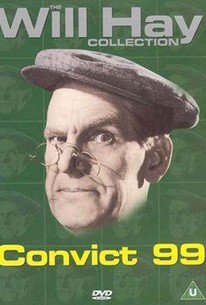 Beloved British comedian Will Hay plays Benjamin Twist, a disgraced school master who goes to an agency to apply for a job heading up a reform school for difficult boys. The agency mistakenly believes he is a Mr. Benjamin, a tough prison warden, and he is assigned to one of the country's nastiest prisons. Arriving drunk at his new job, Benjamin is mistakenly assumed to be a prisoner, christened "Convict 99" and put in a cell. There he meets Jerry the Mole, the prison's oldest resident, who has been working on an escape tunnel for years. Benjamin's innocence is soon discovered, and he takes over as warden, instituting some humane reforms. Unfortunately, he soon becomes the victim of a scam involving prison funds perpetrated by the real Convict 99 and Benjamin -- accompanied by those prisoners who are on his side -- must track down the crook and find a way of returning the money to the bank. ~ Craig Butler, Rovi

Will Hay
as Dr. Benjamin Twist

Moore Marriott
as Jerry the Mole

The farcical situations are carried to such wild extremes that they mostly defeat their own ends.

There are no featured reviews for Convict 99 at this time.