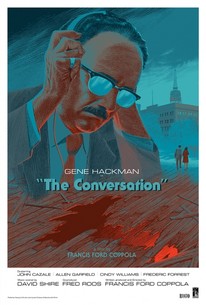 Made between The Godfather (1972) and The Godfather Part II (1974), and in part a homage to Michelangelo Antonioni's art-movie classic Blow-Up (1966), The Conversation was a return to small-scale art films for Francis Ford Coppola. Sound surveillance expert Harry Caul (Gene Hackman) is hired to track a young couple (Cindy Williams and Frederic Forrest), taping their conversation as they walk through San Francisco's crowded Union Square. Knowing full well how technology can invade privacy, Harry obsessively keeps to himself, separating business from his personal life, even refusing to discuss what he does or where he lives with his girlfriend, Amy (Teri Garr). Harry's work starts to trouble him, however, as he comes to believe that the conversation he pieced together reveals a plot by the mysterious corporate "Director" who hired him to murder the couple. After he allows himself to be seduced by a call girl, who then steals the tapes, Harry is all the more convinced that a killing will occur, and he can no longer separate his job from his conscience. Coppola, cinematographer Bill Butler, and Oscar-nominated sound editor Walter Murch convey the narrative through Harry's aural and visual experience, beginning with the slow opening zoom of Union Square accompanied by the alternately muddled and clear sound of the couple's conversation caught by Harry's microphones. The Godfather Part II and The Conversation earned Coppola a rare pair of Oscar nominations for Best Picture, as well as two nominations for Best Screenplay (The Godfather Part II won both). Praised by critics, The Conversation was not a popular hit, but it has since come to be seen as one of the artistic high points of the decade, as well as of Coppola's career. Its atmosphere of paranoia and suspicion, combined with its obsessive loner antihero, made it prototypical of the darker "American art movies" of the early '70s, as its audiotape storyline also made it seem eerily appropriate for the era of the Watergate scandal. ~ Lucia Bozzola, Rovi

Robert Duvall
as The Director

Robert Shields
as The Mime

Phoebe Alexander
as Lurleen
View All

News & Interviews for The Conversation

View All The Conversation News

Critic Reviews for The Conversation

Thanks to Walter Murch's keen, intuitive sound montage and Hackman's clammy, subtle performance, the movie captures [an] elusive and universal fear-that of losing the power to respond, emotionally and morally, to the evidence of one's own senses.

A major artistic asset to the film -- besides script, direction and the top performances -- is supervising editor Walter Murch's sound collage and re-recording.

Coppola manages to turn an expert thriller into a portrayal of the conflict between ritual and responsibility without ever letting the levels of tension subside or the complicated plot get muddled.

A bleak and devastatingly brilliant film.

The Conversation is an intricate and unsettlingly subtle character study, with a very strong performance from Hackman.

Coming after the dark, sumptuous classicism of The Godfather, The Conversation's choppy, elliptical style looked almost like the work of a different filmmaker, one willing to take risks with new forms and techniques.

The coldest, most alienated Hollywood film from an era of suspicion and anxiety, a time in American life when we realized that ordinary discourse had to be decoded, that the unseen forces controlling our lives were sinister, and knowledge was fragmentary.

A tense psychological thriller. But dig deeper and you'll find the tragedy of Hackman's Harry Caul. His burden and his loneliness add a melancholic tone to the entire film amidst the commentary on technology and privacy that is all too relevant today.

It proves, ten years early, in a compelling, chilling vision, how close we are to Orwell's 1984.

I frankly don't quite know what to make of Francis Ford Coppola's new film, The Conversation, though I should hasten to add that I was fascinated by much of it.

The Conversation, it's called, and it's a volcano of a movie, an absolute sensation. I liked it better even than The Godfather... The fun of seeing it for the first time is all your's and I envy you.

Audience Reviews for The Conversation

A sophisticated and taut narrative in which Coppola does with sound what Antonioni had done with image in his Blow-up, following a paranoid man unable to open up to anybody and trying desperately to put the pieces together of something that he cannot understand.

Between The Godfather and The Godfather Part II Francis Ford Coppola made a film developed from an idea he had almost a decade earlier. Ironically, the main idea behind the film (tape recording) would be the focal point of one of the worst scandals in American history that was going down as this film was being produced and released. The Conversation is about surveillance expert Harry Caul (Gene Hackman), who is a legend in his field, but has skeletons in his closet. Supported by his assistant Stan (the always great John Cazale) Harry has been hired to record and report on a couple (Cindy Williams and Fredrick Forrest) by a man only known as The Director (Robert Duvall). As the job progresses Harry begins to worry about what the consequences of the information he's about to deliver will have on the parties lives based on an incident from his past that still haunts him. Hackman plays Caul as a very low key individual that doesn't want any attention, yet is the center of attention in his little world of watching and listening. He's an anxious little man that knows his business and understands who to operate his personal life to keep it out of his work life. Hackman had hit it big by this point and The Conversation really is a change of pace compared to some of hos other work, mainly looking at The French Connection. The other surprising standout in the film is Harrison Ford as Martin Stett, the threatening thug like individual that is the barrier between the world and The Director. Ford's performance is very confrontational, but he doesn't really do anything to give you a reason to fear him. It's all in your head. The main theme of The Conversation is paranoia. The thing is that the paranoia belongs to Harry Caul. He's the one that's watching people, but he's the most fearful in the film. From the early moments of the movie you see how Harry dictates his entire life to maintain his privacy and you get to the point that you wonder if maybe some of this fear is in his head, held up by Harry having some delusions leading him to fear that history was going to repeat itself. Where the two Godfather films were expansive films traveling over thousands of miles and involving decades. they're open and airy and give you plenty of room to breathe. The Conversation is the opposite. It's a claustrophobic film that has you breathing heavy from the fear of what's closing in on us. The stinger on all of this is that even though there is no one nearby, you are being held close with the technology that lets you see and hear from elsewhere, which ironically has become even more prevalent forty years later with our advances in tech. The film itself serves as another Coppola classic from his prime era in the 1970's It's a great film that kind of gets pushed away due to the Godfather films. 70's grit at its finest, almost symbolizing the greatness of the cinema of the era.

Without a doubt Francis Ford Coppola's masterpiece has to be "The Conversation" not just because of its concrete, magnificent plot, or the immaculately crafted twist, or the stellar performances, but also for the look and the immensity of how this film is designed and shot. From beginning to end Coppola threads through significant character development and intrigue in order to keep us guessing throughout this tightly paced thriller. Hackman is pathetically eccentric and complex in his role as Harry Caul, as he is both occupied with his work, and also soon becomes enraptured with the moral aspects in the choices he has to make. The opening scene is magnificent in its scale as well as scope, and that level of artistry stays present throughout the rest of the film. There's an aspect of moral outrage, as well as a seat of the pants thrill that only seventies Coppola can supply. Altogether this masterpiece has been heralded for its intensity and for its manic thrill, all the more interesting in today's America, intent on keeping the government away from surveillance.