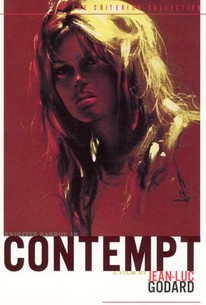 Contempt is the story of the end of a marriage. Camille (Brigitte Bardot) falls out of love with her husband Paul (Michel Piccoli) while he is rewriting the screenplay Odyssey by American producer Jeremiah Prokosch (Jack Palance). Just as the director of Prokosch's film, Fritz Lang, says that The Odyssey is the story of individuals confronting their situations in a real world, Le Mépris itself is an examination of the position of the filmmaker in the commercial cinema. Godard himself was facing this situation in the production of Le Mépris. Italian producer Carlo Ponti had given him the biggest budget of his career, and he found himself working with a star of Bardot's magnitude for the first time.

Fritz Lang
as Himself

Raoul Coutard
as Cameraman
View All

Five Favorite Films with Derek Cianfrance
Biehn and Cameron Back Together on "Avatar"?
One-Armed Push-ups All Around in Honor of Jack Palance

"Contempt" transports us back to another era: an early '60s world in which the classicism of the past...is juxtaposed with the emptiness and ennui of modern culture.

The film is about nothing but cinema itself, which gets a bit wearing, unless you are one of those people who like watching a movie in order to check off the references to other movies. Still, it's a masterwork of some sort.

The miracle here is that for all its use of irony and self-reflexive devices, Le Mepris still ends up with a considerable emotional punch.

This is one of the French new wave master's seminal films, a satire on the making of a Hollywood-style movie that exploits Bardot's femme fatale Camille with no less aplomb than Hollywood itself.

A knowing, tragic-comic aria for love and moviemaking.

Classic Godard, and a major cornerstone of the French New Wave.

Few films have achieved such elegance.

Godard was the artist who tore cinema apart and rebuilt it to suit his own interests and ends.

If Le Mépris lacks the uninhibited character of, say, Breathless, Pierrot le Fou, or Alphaville it undoubtedly makes up for it in emotional potency.

If you want to know the cinema of Godard, then this is a great place to start.

A powerful and devastating story that depicts with painful honesty the gradual dismantling of a marriage triggered by an ambiguous lack of trust, and it is a big-budget Godard gem that blends sentiment and intellectual musings in a very unique way.

Godard's first major international picture is a visual feast. The use of Cinescope is startling and the colors are so brilliant that they seem to leap off the screen. Godard also utilizes some of the subtly hypnotic camera work that we saw in his previous films. For instance, in one conversation between Camille and Paul, Godard lifts a scene verbatim from 1962's Vivre Sa Vie. Aside from the camera work, the film is a heartbreaking look at the disintegration of a marriage, the price of selling out, and the constant tug of war between the classical and the modern. It moves at a snail's pace but once you get a feel for it, it can at times be rather touching. With that said, I feel like Godard missed a lot of opportunities to achieve a genuine catharsis. The ambiguity of Bardot's contempt for her husband places a wall between the characters and the viewer. While I can appreciate ambiguity, in a film which centers on a single relationship I think the audience needs more to run with. On top of this, Palance's performance seemed to rub me the wrong way. I know that he is the greedy American producer, but his performance seemed way too over the top to be believable. While not Godard's best, it is definitely worth a watch.

"There's nothing like the movies. Usually, when you see women, they're dressed. But put them in a movie, and you see their backsides." Paul Javal is a writer who is hired to make a script for a new movie about Ulysses more commercial, which is to be directed by Fritz Lang and produced by Jeremy Prokosch. But because he let his wife Camille drive with Prokosch and he is late, she believes, he uses her as a sort of present for Prokosch to get get a better payment.

REVIEW
While he became far too self-indulgent later on in his career, from "Breathless" through "Week End", I am fascinated by Jean-Luc Goddard. No other filmmaker of the time managed to toy with the medium as well as he did. When it comes to meta-fiction, self reference, or breaking the forth wall, nobody can quite match Godard. In many ways, "Contempt" is one of his more restrained films, possibly since it was produced by a major studio with renowned film stars and a bigger budget. It isn't nearly as insane or shocking as "Band of Outsiders" or "Week End". However, this forced Godard to be a bit more subtle, as this contains some of his most vicious and biting attacks on the commercialization of art. Godard recognized that the major studio would attempt to bowdlerize his work, so he created a film for them about an artist being forced to compromise for profit. Past the always interesting self reference, another reason this film works so well is that its possibly the most human of Godard's works. More than ever, his characters don't appear as revolutionary mouthpieces but actual people. Maybe its because he saw a lot of himself in the main character played by Michael Piccoli, but both him and the gorgeous Bridgette Bardot play well-rounded and sympathetic characters. This is just another layer to a complex film, one which poses questions and forces you to devise answers by watching it repeatedly. This isn't my personal favorite by Godard (that is, again, "Band of Outsiders"), but its another constantly fascinating film from the cinema's most restless experimenter.

Admittedly, I've had a copy of this movie for years but have never gotten through the whole thing until last night. Jesus Christ, was a pretentious piece of shit. I don't think I've hated a movie this much since Jules and Jim. And I've seen Transformers 2: Revenge of the Fallen. Some nice cinematography, Jack Palance's amusing for his first 15 minutes turn as the ugly American producer and Bardot's ass are the only reasons I don't entirely regret watching this movie. (But even her ass got old after a few minutes. There. I said it.) Okay, maybe Fritz Lang too but his appearance aside, there was not a single character in this movie that I cared about. Just a lot of fickle arguments in scenes that go on way too long. The dramatic score had an effect until it got played every six seconds and while I don't agree, this movie fully explains to me why people can hate foreign films. For me, trying to stay interested in this movie was like babysitting a bipolar beauty pageant winner on ecstasy -- I started off kind of interested, was quickly filled with hate, but ultimately finished the job because I told myself I would.