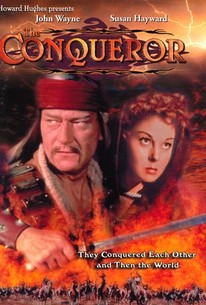 In the historical epic The Conqueror, John Wayne stars as Temujin, better known as Genghis Khan. Red-haired Susan Hayward costars as Bortai, the Tartar princess whom Temujin claims as the spoils of battle. Eventually, Bortai's hatred for her captor metamorphoses into love, while Temujin's hordes lay claim to the entire Gobi Desert. Director Dick Powell, many of the actors (John Wayne, Susan Hayward, Pedro Armendariz, Thomas Gomez, Agnes Moorehead), and several of the crew members later fell victim to cancer, allegedly the result of producer Howard Hughes' decision to lens the film on location near the atomic testing grounds in the Utah desert.

Jarma Lewis
as Girl in bath

Critic Reviews for The Conqueror

Howard Hughes' anachronistic saga is one of the worst films ever made with an embarrassing performance of John Wayne as Genghis Khan the Warrior.

No one comes out of this train wreck holding their head up.

Audience Reviews for The Conqueror

John Wayne as a Mongolian warlord HAS to be one of the worst casting jobs in the history of Cinema. I love The Duke as much as anyone, but Genghis Khan he ain't.

Dear Lord God, what were they thinking...? Featuring easily the worst piece of casting in cinematic history, John Wayne stars as Genghis Khan (yes, you read that right) in the story of his life. It is quite funny for about 10 minutes, until you realise that it's quite mind-buggering dull. One star for the curiosity value, but otherwise a total waste of celluloid. The fact that financial backer Howard Hughes paid $12 million to recall every print in existence so no-one could see it should tell you everything you need to know!