Confessions of a Dangerous Mind2003

Confessions of a Dangerous Mind (2003) 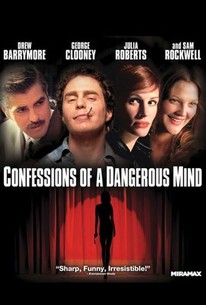 Critics Consensus: Rockwell is spot-on as Barris, and Clooney directs with entertaining style and flair.

Critics Consensus: Rockwell is spot-on as Barris, and Clooney directs with entertaining style and flair.

Critic Consensus: Rockwell is spot-on as Barris, and Clooney directs with entertaining style and flair.

Confessions of a Dangerous Mind Photos

Chuck Barris is best known to most Americans as the guy who used to host The Gong Show. He was also the creator and producer of The Dating Game, The Newlywed Game, and a handful of other successful game shows in the 1960s and 1970s. But was he also a hired killer working with the CIA? That's the take-it-or-leave-it premise of Confessions of a Dangerous Mind, based on the memoir of the same name by Chuck Barris. Barris (Sam Rockwell) grows up dreaming of success in show biz and winning the hearts of beautiful women, but early on, he meets with plenty of resistance from both women and the television industry, despite writing the hit tune "Palisades Park" and scoring a job with Dick Clark on American Bandstand. The 1960s proves more fortunate for Barris; he meets the love of his life, Penny (Drew Barrymore), and sells ABC on the idea of The Dating Game. However, after the show has made him wealthy and successful, Barris is approached by the mysterious Jim Byrd (George Clooney), a CIA agent who wants to recruit Barris as a covert operative. Barris finds the notion of playing spy games intriguing and agrees, but soon discovers what Byrd and his partners really want is for Barris to assassinate uncooperative figures around the world. Soon, Barris finds that his life has been all but taken over by Byrd and another CIA agent, the mysterious and sexy Patricia (Julia Roberts). As he hops the globe, killing people in the name of American security (using his status as a Dating Game chaperone as a cover), Barris learns that the KGB has discovered his not-so-little secret and that his own life is in great danger. Confessions of a Dangerous Mind marked the directorial debut of actor George Clooney, working from a screenplay adapted by Charlie Kaufman from Barris' book. Dick Clark, Dating Game host Jim Lange, frequent Gong Show panelist Jaye P. Morgan, and Gene Gene Patton appear as themselves. ~ Mark Deming, Rovi

Isabelle Blais
as Chuck's Date No.2

Melissa Carter
as Chuck's Date No.3

Barbara Bacci
as Woman In Veil

Marlida Ferreira
as Woman In Pub

Suyun Kim
as Asian Folksinger No.1

Shulan Noma
as Asian Folksinger No.2

Bill Corday
as Justice of the Peace

Chuck Barris
as Himself

Dick Clark
as Himself

Jaye P. Morgan
as Herself

Jim Lange
as Himself

News & Interviews for Confessions of a Dangerous Mind

Free Movies Online: 200 Fresh Movies to Watch Online For Free
Why George Clooney’s Confessions of a Dangerous Mind Works As A Tragicomedy Despite Its Indulgent Flourishes
Definitive Julia Roberts Performances

View All Confessions of a Dangerous Mind News

Critic Reviews for Confessions of a Dangerous Mind

Brimming with slightly self-conscious directorial panache, the movie zips between nearly three decades, fantasy and reality without ever really deciding how seriously it wants to take itself.

Bounces around like the smarter and weirder older brother of Spielberg's Catch Me If You Can.

Directing for the first time, Clooney turns out to be a natural when it comes to parody...

Clooney zips through a very funny first act, before becoming a little bogged down as the action enters John le Carré territory.

The American film of the season -- and maybe of the year, or the last couple of years...

The film does not offer any explanations. Instead, it intrigues more.

Though the real-life Barris has yet to confirm or deny his double life as detailed in his autobiography of the same name, Confessions of a Dangerous Mind is an fascinating tale about an even more fascinating guy.

Well-acted and well-written, for mature teens+.

An intriguing, bizarre and challenging film that invites us into a world filled with larger-than-life characters and strange occurrences.

Fact and possible fiction amble to a photo finish as one of pop culture's nuttiest milestones.

Clooney wanted Kaufman's script delivered without corruption or softening. He has overcorrected and made a glum, almost listless movie.

Audience Reviews for Confessions of a Dangerous Mind

His future was uncertain. His every move was being watched. Very Good Film! One of Charlie Kaufman's more overlooked and underrated screenplays, 'Confessions of a Dangerous Mind' may have been something of a departure from the high-concept experimentalism that made his previous brainchildren, 'Being John Malkovich' and 'Adaptation' (a masterpiece and a near-masterpiece, respectively) such striking breaths of fresh air, but on no account should its ability to engage and entertain on those strengths of its own be underestimated. Taking a well-earned break from the surreal situations and the complex plotting, Kaufman turned his attention here to a much more straightforward yarn that was better grounded in reality; the twist there being that it was based on a story that, while allegedly true, just as likely never happened. 'Confessions' though is willing to give Chuck Barris the benefit of the doubt in regards to his dubious claims to have been a secret assassin for the CIA in the midst of his days as a game show host, giving life to such controversial classic as 'the Gong Show' and 'the Dating Game' while taking it from a range of human targets around the globe. It sits back and lets the scenario unfold without question - and does so with such considerable spirit and vigour that it's hard not to get lured in and pulled along for the ride. Regardless of whether the real-life Barris truly did have some incredible adventures within his time, or simply an overly-active imagination, this ×movie translates it into one heck of an enjoyable romp - slick, stylish and entrancing on the surface, and with a bracingly poignant and sobering tale lurking underneath. It's not an innovative, far-out, one-of-a-kind experience (a la 'Being John Malkovich'). But it's an entertaining, well-made and entirely satisfying flick with one particularly brilliant stand-out performance, and that's more than enough to do the job. Kaufman can probably pen avant-garde better than anybody else today, but 'Confessions of a Dangerous Mind' goes to prove that, when in the right company, he can write 'normal' just as impressively. Television made him famous, but his biggest hits happened off screen. "Confessions of a Dangerous Mind" is the story of a legendary showman's double life - television producer by day, CIA assassin by night. At the height of his TV career, Chuck Barris was recruited by the CIA and trained to become a covert operative. Or so Barris said.

Jim Byrd: You're an assassination enthusiast, a murder buff. "Some Things Are Better Left Top Secret" Confessions of a Dangerous Mind is an altogether interesting film from all angles. There's the life of Chuck Barris aspect, which is the story of the film, and if the CIA connection is actually true or not. Then there's the technical elements. It's George Clooney's directorial debut and it's written by Charlie Kauffman. There's also the great cast, including: Sam Rockwell, Drew Barrymore, George Clooney, and Julia Roberts. Overall, it's a fairly good movie, but in that sense it is also disappointing because I believe, given the source material and names attached, it should have been a lot better. This biographical film follows Chuck Barris as he works his way into television by coming up with game show ideas like, The Dating Game. In enters, Jim Byrd, who approaches Chuck about becoming an independent contract killer for the CIA right before he hits it big with his first game show. From their we see the supposed double life of Chuck Barris. On the surface he's just a trash television personality, but behind the scenes he's a lethal assassin.  At the end of this one I was left wondering what could have been. The movie is extremely messy in spots and some scenes just don't work at all. Then there's the scenes that are just about perfect also. If only Clooney, Kauffman, and the cast could have found a happy medium between the absurd and the serious, this would have been a much better film. As it is, this is still a pretty good film. It's far from perfect and suffers from a variety of problems, but it's altogether entertaining and interesting. It's worth a watch for more than the fact that it's Clooney's directorial debut and a Kauffman script.

This is one of those films that took forever to get made, had a lot of turnover in terms of casting, directors, and screenwriters. Because this film did take twenty years to make, and had some creative differences between director George Clooney and screenwriter Charlie Kaufman, there are some strange scenes and odd choices to this semi-biographic film about host, show creator, and supposed CIA operative Chuck Barris. The main objective of the film is to show the true story of Chuck Barris, based on his autobiography, and that earnest attitude towards staying true to a set of events that are widely disputed makes cartoonish circumstances come off as corny and strange. If the script had been handled appropriately and given the credence that a Kaufman script deserves, then this film would be better received than it already is. As a straight biopic this film is off-putting at every turn, but as a general film it remains very interesting. Sam Rockwell has the swag and confidence to be a bigger star than he's given credit for, and he proves that in this film as well as the critically acclaimed "Moon". The rest of the cast is engaging, and the film stays interesting, but when it comes to Barris being a spy, everything feels slow, methodical, and sluggish. Particularly when it comes to Julia Roberts' performances, the story gets a bit muddled. There is some action, though it belies the point of the actual movie, and makes it harder to characterize really who Barris is. Is he the smart and affable game show creator, the thrust upon hero, or the wronged man who has taken on too much responsibility? You can never feel close to the character, and you can never understand him either. If it's not flashing game show clips at you it all feels bleak and wrong.

George Clooney clearly had fun directing this movie, as there are all sorts of neat-looking details going on. Unfortunately, Charlie Kaufman's least daring script tries to sculpt the story into the usual psyche-study with unsubtle philosophical subtexts, but those elements sort of just flail around, leaving audiences with nothing much more than a wacky, slick-looking drama/thriller thing with a talented but underutilized cast, and not enough substance to complement the style.

Confessions of a Dangerous Mind Quotes