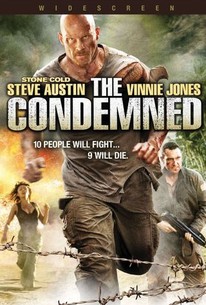 WWE superstar "Stone Cold" Steve Austin stars as a death row inmate who gets a rare second shot at life in director Scott Wiper's adrenaline-charged action thriller. Jack Conrad (Austin) is a dangerous convict currently awaiting execution in a corrupt Central American prison. "Purchased" by a wealthy television producer and transported to a deserted island, the formidable inmate is offered the opportunity to avoid capital punishment and win back his freedom by fighting to the death against nine other condemned criminals in an illegal game to be broadcast uncensored over the Internet. Rick Hoffman and Vinnie Jones co-star in a brutal battle royal of non-stop carnage. ~ Jason Buchanan, Rovi

Steve Harman
as Baxter Guard No.1

Steve Morris
as Baxter Guard No.2

Nigel Harbach
as Baxter Guard No.3

Andy McPhee
as The German

Rai Fazio
as The Italian

Ty Hungerford
as Baxter Guard No.4

Mick Roughan
as Belarus Convict No.2

John Walton
as Belarus Convict No.3

Domenic Brancatisano
as The Arab

News & Interviews for The Condemned

View All The Condemned News

Critic Reviews for The Condemned

The Condemned sprays its fury wide: media manipulators, political opportunists and technology-pacified couch potatoes are among the collaterally damaged. Paying audiences don't get off so easy either.

Cheesy enough to satisfy your B-movie cravings in half Grindhouse's running time.

This is a fast-paced, well-made piece of garbage.

In the great pantheon of recent WWE vehicles, The Condemned ranks somewhere above the Kane vehicle See No Evil and below the John Cena-starrer The Marine.

If you thought getting voted off the island on Survivor was tough, The Condemned takes that concept as ridiculously and hideously far as can be imagined.

While rather preposterously hypocritical in its moral pretensions, it nevertheless comes through in the no-holds-barred, body-slam department.

One of the most deplorable movie-going experiences of my life.

There's nothing wrong with enjoying a balls to the wall guy film where muscle bound behemoths blow shit up and fight to the death...

An action film about a hyper-violent reality contest that quickly devolves into a monotonous series of hand-to-hand combat scenes.

The film even attempts to make moral judgments about how watching a fight to the death is wrong, which ends up alienating anybody that sat their butt down in the theater in the first place.

...Scott Wiper's hopelessly inept directorial choices - coupled with an overall vibe of ugliness - ensures that the movie ultimately fares about as well as its straight-to-video action brethren...

Don't look to glean too much from it other than a few cool fight scenes and some funny one-liners.

Audience Reviews for The Condemned

Surprisingly entertaining film, The Condemned manages to be a fun, entertaining two hours of low budget filmmaking. The concept is a bit derivative from Gamer, which I quite enjoyed, but nonetheless, this is a worthy action thriller well worth your time if you enjoy a low budget action popcorn ride. Well thought out despite a few clichéd ideas, The Condemned is a cool film for what it is, and it does manage to entertain you well enough for two hours and the film is pretty solidly executed for low budget filmmaking. Before going into this one, expect something enjoyable and mindless and you're sure to like it. The film has its weak moments of course, but this is sheer must see material for action buffs. The script, acting and the setting are quite interesting, and well thought out. I thought that Vinnie Jones and Steve Austin were quite good here, and they delivered something truly intense, unflinching and above all riveting. This is one of those movies that shouldn't be passed up due to its sheer entertainment value. I recommend this film to anyone that loves the genre, and even if it's a formulaic idea, it's still fun to watch because there are enough action moments to make this one stand out among other low budget action film. The film is flawed, but nonetheless, it's a worthy affair, a film that is riveting, action packed and never dull. For action buffs, The Condemned is cool, thrilling and a must see piece of film that deserves to be seen by a larger audience. Due to its low budget status, and terrific, engaging action and concept, I'm sure that this film will surely become a future cult classic, as it most definitely deserves it.

It's violent and possess action sequences that is arguably forgettable. The Condemned is a low-grade attempt in garnering the lethal impact of a typical action movie. 2.5/5

Well what have we here, an early 'Expendables' type fighter? a 'Battle Royale' copy? or maybe just a 'Running Man' type thriller? well all this and many more films gone before. The plot...a group of the most violent criminals are hand picked and dumped on a remote island. Each has a small bomb attached to their ankle which will detonate after a certain time limit. They have nothing but their skills to survive and the odd package dropped from a chopper. Only one can be left standing before the time runs out and that last man wins his freedom, FIGHT!!!. So yes I think we have all seen this before, the general idea, and one can assume it will pretty much be like all the rest. It is a bit like a cheaper, low key, grittier 'Expendables' but with guys that aren't overly famous but a good selection of character hardmen and fighters of you will. Vinnie Jones, Nathan Jones and Austin are the bigger names here whilst other criminals are made up of really well built blokes and some good fighters like Masa Yamaguchi. Of course the plot isn't like the Sly vehicle but it is a nice ensemble of hardasses. The whole film plays out like one setup after another, one fight, a bit of plot, then another fight etc...The fights vary from pretty cool to nothing much but its all very violent and bloody, not for the PG crowd that's for sure. All the characters have your standard backgrounds, the hero Austin is of course ex-Delta Force whilst Vinnie is ex-SAS gone bad, bog standard military guff really. All the while its watched by the internet crew and their boss who set it all up for profit and morbid kicks...tut tut so naughty. It does work well really, can't lie, its good fun to watch but obviously stupid. Would they really include women? surely that would be rather unfair. The violence in some parts is quite close to bone really, Vinnie and his partner rape a women to death then find her husband (also a criminal) and burn him to death after beating him half to death!! so yeah bit sick. You could say its even like 'Call of Duty' or any FPS, but with bloody murder and fights instead of gun runnin'. When the odd help package is dropped into the 'game' it does feel like a videogame of sorts. Its certainly balls to the wall with guts n headbutts and the perfect action vehicle. Nothing original and no real surprises other than Vinnie being really quite evil, but its undeniably fun despite Austin being a plank and the ending being a big anti climax for the two main guys.

far more fun than it shouldve been!!