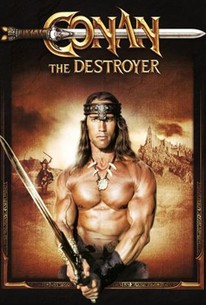 Critics Consensus: Conan the Destroyer softens the edges that gave its predecessor gravitas, resulting in a campy sequel without the comparative thrills.

Critic Consensus: Conan the Destroyer softens the edges that gave its predecessor gravitas, resulting in a campy sequel without the comparative thrills.

Based on a character created by Robert E. Howard, this fast-paced, occasionally humorous sequel to Conan the Barbarian features the hero (Arnold Schwarzenegger) as he is commissioned by the evil queen Taramis (Sarah Douglas) to safely escort a teen princess (Olivia D'Abo) and her powerful bodyguard (Wilt Chamberlain) to a far away castle to retrieve the magic Horn of Dagon. Unknown to Conan, the queen plans to sacrifice the princess when she returns and inherit her kingdom after the bodyguard kills Conan. The queen's plans fail to take into consideration Conan's strength and cunning and the abilities of his sidekicks: the eccentric wizard Akiro (Mako), the wild woman Zula (Grace Jones), and the inept Malak (Tracey Walter). Together the hero and his allies must defeat both mortal and supernatural foes in this voyage to sword-and-sorcery land. ~ Eleanor Mannikka, Rovi

Mako
as Akiro 'The Wizard'

Ferdinand "Ferdy" Mayne
as The Leader

Valérie Quennessen
as The Princess
View All

News & Interviews for Conan the Destroyer

Nu Image/Millennium, Lionsgate Teaming Up for New Conan the Barbarian
New Line May Be Resurrecting "Conan"
Hoffman to Star with Hanks and Then Face the "Devil"

View All Conan the Destroyer News

Critic Reviews for Conan the Destroyer

The first Conan movie, Conan the Barbarian, was a dark and gloomy fantasy about the shadows of prehistory. This second film is sillier, funnier, and more entertaining.

This sequel was roundly trashed, but it's no worse than its predecessor, since its campy components at least take the edge off the tedious proceedings.

There's a goofy MST-3K quality about Conan the Destroyer that aims for family friendly but tries to be sexy as well, something we saw a lot of in the 80s.

Conan the Destroyer is a rather silly follow-up, with less raw emotion, less excitement and far too many dumb sidekicks.

What happens when you take everything that makes Conan the Barbarian memorable, and strip it down to a light-hearted, PG-rated version of itself... stupid and boring and generally unintelligible.

There are still enjoyable elements in it, but it feels as different from its predecessor as a Roger Moore Bond does compared to a Sean Connery.

Pretty bad, but not as bad as people say it is.

More jokey and less intense than the original.

Has some serious value as camp, but it's a lot less brawny than the original.

Audience Reviews for Conan the Destroyer

So we've had basic plot idea number one: family killed, take revenge. This sequel goes with basic plot number two: given quest by ruler to find something, but its a trick...yes I just blew a huge spoiler so sue me. Yep, the rather devious and clearly untrustworthy Queen Taramis asks Conan to go off and find a sacred object so she can awaken a God, hmmm I smell something fishy. So Conan agrees because the evil Queen says she will resurrect his lover from the first film Valeria if he succeeds, oh come on Conan don't be dumb! Did I mention this was all a big trick by the naughty Queen? The main draw here is the cast really, Arnie's team are a much more interesting group this time with the insane Grace Jones, annoyingly crap acting of Tracy Walter, Mako back as the obligatory team wizard, d'Abo as the young virginal Princess and ex basketball star Wilt Chamberlain, a very colourful bunch. They are all up against the gorgeous and stunning Sarah Douglas who as usual is doing what she does best, being a sexy evil villainous bitch, oh my! The main problem with this sequel despite its better looks, fancy titles, a bigger Arnie and overall slightly sexier production values, is the fact it was watered down. The film aims for more comedy, slapstick and visual buffoonery over blood n violence, nothing wrong with this I guess but for me its a thumbs down. The first film was more adult and gave the film a grittier nastier feel, this just feels like a kids adventure at times. Even with Basil Poledouris booming musical score (first films sounded like 'Total Recall', this sounds like its been extracted from 'Robocop') it doesn't make much difference. I must admit to enjoying these films much more when I was but a mere sprogling. The fact its Arnie in the main role as Conan saves the film from doom in my opinion as there isn't too much more on offer. There isn't much action of note, not much blood, set pieces are drab and the adventure a bit dull, the only thing to lift you is the nice monster sequence at the end (head looks a bit like the Brundlefly creature from the Cronenberg film). That and Sarah Douglas being all sexy n evil (oh my Queen!), for me these films haven't aged so well and I still prefer 'Beastmaster'.

The 1982 action classic directed by John Millius was a standout piece of action cinema that wasn't perfect, but moved along at a hefty pace to really grab your attention and delivers a thrilling two hours of action packed entertainment. Arnold Schwarzenegger reprises his role as Conan in this follow-up to the original, and it's a more tongue in cheek film than the first. I much preferred the first film, and I felt that this sequel was a decent affair at best, and it was somewhat ent5ertaining for what it was, but compared to the original, I felt it simply didn't live up to the original film. The whole vibe of the film was pretty much layed back, as if the filmmakers didn't care about the results on-screen. Conan the Destroyer is a decent movie that could have been much better than this. The film had lots of potential of being a worthwhile action film, but it does leave a lot to be desired. For diehard fans of the original, you'll probably be disappointed by this film, as it is a step down from the first. There are some good ideas here, and the film does boast some impressive action scenes, however, it never has a truly engaging story to blends well with the action. The first film had both, and it also had a good cast. This sequel, just ends up being a film that is only worth seeing if you have not5hing else better to watch. Decent at best, Conan the Destroyer has plenty of room for improvement, but it manages to be entertaining despite its flaws, just don't go into this one expecting something as good as the original.

This is a great sequel and fantasy adventure film. I really enjoyed it. The story wasn't too predictable, but it wasn't confusing either, it was good and had humor, romance, and surprises as well as action and swordplay. A lot of fun.

Toning down the violence of its predecessor, and injecting "comedy" is not a recipe for success. This film borderlines on "unwatchable" (and I've seen Good Luck Chuck). I know De Laurentiis and company wanted to make Destroyer a PG film in order to broaden its appeal, but this certainly isn't the way to go about it. On the bright side, I was surprised to find out that legendary cinematographer Jack Cardiff shot this film (The African Queen, Black Narcissus, and The Red Shoes among his career highlights). Just when you thought a Powell-Pressburger/Conan connection couldn't be made, there you go.