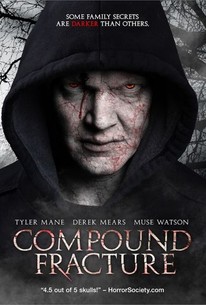 After the gruesome death of his sister's husband, Michael Wolffsen (Tyler Mane - Rob Zombie's Halloween) returns home with his fiancee and his recently orphaned nephew to take care of his father Gary (Muse Watson). Gary has changed much since the last time Michael saw him: he's become extremely paranoid that a supernatural force is out to get him and is obsessed with making his home an unassailable compound. While Michael and his family initially believe that Gary is suffering from symptoms of dementia, they soon discover that Gary has a reason to be scared. Something truly evil is lurking outside the house and it won't stop until it kills off every last member of the Wolffsen family. (c) Level 33 Entertainment

Daniel Roebuck
as Jim
View All

There are no critic reviews yet for Compound Fracture. Keep checking Rotten Tomatoes for updates!

There are no featured audience reviews yet. Click the link below to see what others say about Compound Fracture!