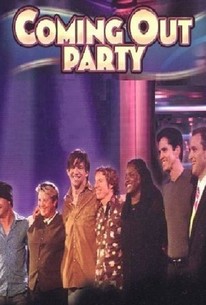 Seven gay and lesbian standup comics share their memories of coming out of the closet to family, friends, and co-workers in this performance video. Coming Out Party features performances from Terry Sweeney (Saturday Night Live, Mad TV), Bob Smith (the first openly gay comic to appear on The Tonight Show), John Riggi (The Larry Sanders Show), Dan Renzi (The Real World: Miami), Jackie Beat (US magazine), Rene Hicks (Full Frontal Comedy), and Sabrina Matthews (Comedy Central Presents...Sabrina Matthews) as they share both the funny and bittersweet sides of this difficult, but liberating, experience.

Critic Reviews for Coming Out Party

There are no critic reviews yet for Coming Out Party. Keep checking Rotten Tomatoes for updates!

There are no featured reviews for Coming Out Party at this time.