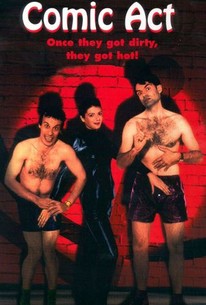 A trio of stand-up comics discover that success is no laughing matter in this comedy-drama. Danny, the manager of a night club in London, makes it his business to find the best and brightest "cutting edge" comedy talent, and thinks that he's found a real prize in Alex (Suki Webster), an attractive woman with a background in improvisational theater who has a keen gift for humor. Alex is encouraged to take a look at Jay and Gus (Neil Mullarkey and David Schneider), a pair of performers who've been doing a "twin" act for some time. Alex's style bounces off Jay and Gus' material perfectly, and soon the threesome are rising stars on the British comedy circuit. But their offstage lives are hardly as harmonious as their club act. Both Jay and Gus are infatuated with Alex, and she's already involved with an artist -- and Gus is having a fling with a model. Meanwhile, romantic frustrations and dueling egos lead the three into infighting and drugs, threatening to derail their success almost as quickly as they began to pick up steam. Comic Act was directed by Jack Hazan, best known for his semi-documentary look at The Clash, Rude Boy.

There are no critic reviews yet for Comic Act. Keep checking Rotten Tomatoes for updates!

There are no featured reviews for Comic Act at this time.