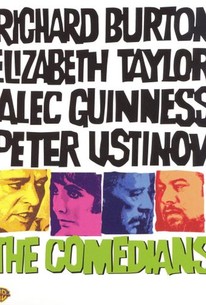 The humorous title of this story taken from the novel by Graham Greene gives the viewer the wrong impression. The story concerns the residents of a once-posh hotel in Haiti and the fate of the country's people under the despotic dictator Papa Doc Duvalier. Martha (Elizabeth Taylor) is the philandering wife of a South American ambassador Peter Ustinov. She seeks solace in the arms of hotel-owner Brown (Richard Burton), whose main focus is to keep making improvements on his crumbling building. Alec Guinness plays Jones, the suave charlatan who claims to be a retired military officer to hide his vocation as a shadowy weapons dealer. Brown later gets a sudden twinge of morality and decides to go off to the mountains to help the rebels in their heroic cause. Watch for silent film great Lillian Gish as Mrs. Smith in this plodding drama. ~ Dan Pavlides, Rovi

Aliba Peters
as Cesar
View All

Critic Reviews for The Comedians

At such moments of transcendent drama -- and there are enough to make it worthwhile -- The Comedians is easily forgiven its other sins.

It is conventional and obvious, indeed, and is rendered no better or more beguiling by some rather superfluous additions of amorous scenes.

The movie tries to be serious and politically significant, and succeeds only in being tedious and pompous.

At 156 minutes, it seems interminable.

Far more interesting to deconstruct than to watch.

Underrated version of Graham Greene's novel with a strong cast.

Audience Reviews for The Comedians

A bit confused and could have been cut into a tighter whole but an interesting document of a time and place that hasn't gotten a lot of treatment certainly not with a cast of this caliber. Leads are fine but the supporting cast of Guinness, Gish, Ford and Ustinov wrap it up.