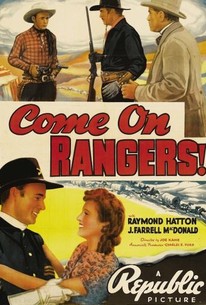 This Roy Rogers musical western (his second starring vehicle for Republic) concerns itself with a group of Texas Rangers, forced to disband when Texas is admitted the Union. The state brings in members of the U.S. Cavalry to provide law enforcement in the Rangers' stead, yet the Cavalry officers become hopelessly confused and muddled -- not only from their ignorance of the territory, but by the guerilla tactics of Texas bandits and local political corruption. When ex-ranger Rogers's brother is killed, he recognizes that the Cavalry will not be able to respond with proper force, and asks his fellow ex-rangers to take up arms in vengeance. The film co-stars Mary Hart, Raymond Hatton, J. Farrell MacDonald and Purnell Pratt.

Horace B. Carpenter
as Man in Bank (uncredited)

Trigger the Horse
View All

Critic Reviews for Come On, Rangers

There are no critic reviews yet for Come On, Rangers. Keep checking Rotten Tomatoes for updates!

There are no featured reviews for Come On, Rangers at this time.