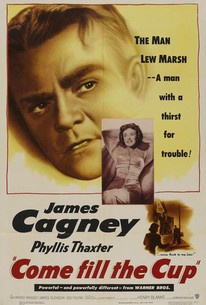 James Cagney plays a once great newspaper reporter ruined by liquor. Thanks to the help of reformed alcoholic James Gleason, Cagney pulls himself out of the gutter and restores his journalistic reputation. Because of his own redemption, Cagney is asked by his editor to straighten out the editor's nephew (Gig Young), a drunken wastrel. The task is made dicey by the fact that the nephew's wife (Phyllis Thaxter) is Cagney's former girlfriend. The nephew's involvement in gangsters results in the death of Cagney's old friend Gleason, but Cagney swallows his rage, vanquishes the crooks, and puts the nephew on the right track. Come Fill the Cup was a little too melodramatic to succeed as an anti-alcohol tract, but it was well acted throughout, especially by Gig Young, who received an Oscar nomination for his efforts.

Elizabeth Flournoy
as Lila
View All

Another newspaper yarn, crammed with hokum in the final reel but strong enough in its early phases to make if, on the whole, an item worth seeing.

There are no featured reviews for Come Fill the Cup at this time.