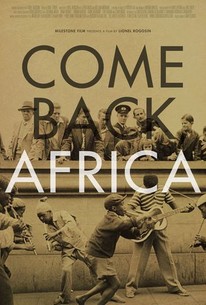 American documentary producer/director Lionel Rogosin followed up his Oscar-nominated film On the Bowery (1956) with another docudrama about the disenfranchised, Come Back Africa. Lensed for the most part in Johannesburg, the film follows a Zulu family that has been uprooted from its native environs and plunked down in the middle of a strange urban "jungle". Due to the repressiveness of the South African powers-that-were, Rogosin was forced to shoot his film with hidden cameras, then obliged to smuggle the footage out of the continent. The finished film, which depicts its protagonists as being the helpless pawns of a white bureaucracy, was condemned as radical propaganda in many landed-gentry circles, especially the coal-mining interests (the main character is worked in the mines until he drops). Conditions may have improved in Johannesburg since Come Back Africa was first released, but the human-rights abuses depicted herein persist elsewhere, making this 35-year-old film as contemporary as today's newspaper.

Critic Reviews for Come Back, Africa

"Come Back, Africa" is most effective as an ethnographic documentary, with cinema verite images of white privilege and black poverty.

While the sights and the sounds aren't enough to constitute a great movie in and of themselves, they do result in a fascinating document.

Come Back, Africa is a work of amazing grace-and a forgotten treasure.

Rogosin was showing a vital culture on the brink, at the moment when it was calcifying into the form it would hold for more than three decades to come.

Come Back, Africa is a timely and remarkable piece of cinema journalism: a matter-of-fact, horrifying study of life in the black depths of South African society.

What it lacks in dramatic structure, it makes up in pictorial urgency.

The theme is one that must arouse the liveliest sympathy. Unfortunately it is a poor job. The acting, all amateur, is crude; the structure is episodic; there is no rhythm, no tension, no sustained mood.

(The film)succeeds simultaneously as activism, as drama, and as a time capsule. It feels like the delicate spell would be broken if a single variable was altered.

A perfect marriage between art and radical politics.

A solid, affecting artifact of the cruelty of late 1950s South Africa, in which music often makes despair and long-suppressed anger bearable.

Its power comes from the location filming of the township.

Audience Reviews for Come Back, Africa

"Come Back, Africa" is something of a historical curio. Filmed in secret in Apartheid-era South Africa in 1959, the film follows Zachariah(Zacharia Mgabi), fresh from Zululand, who is looking for work. First, he ends up at a gold mine where he has no experience but receives brief training before being sent into the mines. His intent is to work in Johannesburg where he can establish a home for his family. To such ends, he asks for help from his supervisor but his first job in the city as an in-house servant ends badly. All of that may be news to those watching in 1959, especially with its references to the African National Congress, and other South African political discussions of the day in response to restrictions on the African population. But to those of us watching in 2012 after the huge amount that has already been written on the subject, there is nothing new here in the movie's episodic structure with its reliance on non-professional actors with occasional musical interludes. Plus, the ending is more than a little sudden.