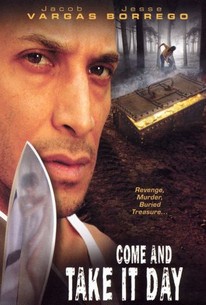 Four blue collar Latino San Antonio restaurant workers become involved in a hunt for a mythical buried chest of silver coins with a startlingly tragic outcome. Jesse (Jesse Borrego), a dishwasher, is self-taught, intelligent, and very bitter; he's spent years putting together the pieces of the puzzle that lead to the hidden treasure of Jesus Gonzales, the Judas-like traitor who was paid to turn in Gregorio Cortez, a turn-of-the-century Mexican folk hero. Hard working cook Miguel (Jacob Vargas) is Jesse's happy-go-lucky cousin who is working on a graphic novel about Cortez, whom Miguel insists is an ancestor. Nena (Maria Candelaria) is a waitress on her way to graduate school when she discovers the plan to recover the silver, and she involves Carlos (Rick Delgado), a waiter who has had a falling out with Jesse. Somehow they have to get to the spot of the buried silver, which happens to be in the middle of a U.S. military base, and Jesse decides the best cover is during the annual Come and Take It Day celebration that commemorates the Cortez events.

Critic Reviews for Come and Take It Day

There are no critic reviews yet for Come and Take It Day. Keep checking Rotten Tomatoes for updates!

Audience Reviews for Come and Take It Day

There are no featured audience reviews yet. Click the link below to see what others say about Come and Take It Day!

Come and Take It Day Quotes