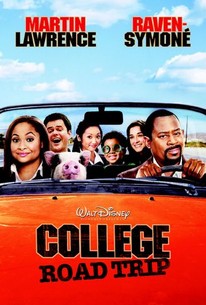 A high-school student (Raven Symone) with noble dreams of becoming a public defender sets out to visit potential universities in the unwanted company of her father (Martin Lawrence) -- an overprotective cop -- in this road trip comedy produced by Andrew Gunn and directed by Roger Kumble. Melanie (Symone) is about to graduate high school, and she's ready to take her first step toward adulthood by hitting the road to explore her college prospects with a few close female friends. But despite the fact that this trip is strictly "girls only," Melanie's father isn't comfortable with the prospect of his little princess hitting the road without an adult chaperone -- and what better guardian to have while you're out on the open road than the chief of police himself? Of course, while Melanie's father only has the best of intentions, his presence on a trip that was designed to mark his little girl's emergence as a young adult leads to an endless series of comic complications.

Will Sasso
as Deputy O'Mally

There isn't an ounce of real life between here and Somers Town.

Oh no, it's a Martin Lawrence family comedy, and it's sponsored by Disney. What kind of a sadist put those two together? Come back, Ice Cube, all is forgiven. Actually, please don't.

Even with a brief running time, 'College Road Trip' is an ordeal that even its target audience will find dispiritingly lame.

A gag inducing over the top mess of a family film.

A Disney production that would seemingly be more at home on the Disney Channel than in the local multiplex.

To put it bluntly, this trip isn't worth taking for the vast majority of movie-goers.

For horrified parents, Donny Osmond's cameo is - scarily - the sole lifebelt in a truly desperate mess of unamusing plot randomness, which runs from sky-diving to high-IQ pigs.

Children might find the slapstick routines amusing, but for older viewers this is a mirthless voyage.

Imagine being locked in a car with Charles Manson, Idi Amin and Osama bin Laden. The worst road trip ever? Nope. That honour belongs to Martin Lawrence's latest so-called comedy, which parks itself neatly between the words appalling and god-awful.

Although its stars have solid chemistry, it isn't enough to win audiences over. College Road Trip is a bundle of gags and slapstick humor that doesn't even shroud the fact that it lacks a true script/plot. 2.5/5

Pretty much what you'd expect. Unless you are watching with a group of elementary school kids you are baby sitting (like me), there isn't any reason to watch.

This movie was not funny at all. It is one of the cheesiest and most ridiculous movies youll see. It had terrible comedy, because believe me, nobody I know laughed. It has a stupid plot that is boring, cliche, and stupid. Martin Lawrence and Raven Symone have something in common, they're both horrible actors. Overall if you want a good family comedy, get a PIXAR movie or something.