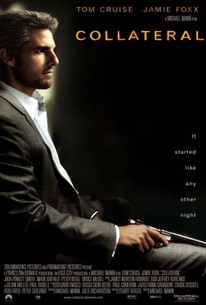 A taxi driver is unexpectedly taken on the ride of his life in this stylish thriller from acclaimed director Michael Mann. Max (Jamie Foxx) is a cab driver who hopes to some day open his own limo company; one night behind the wheel begins promisingly when he picks up Annie (Jada Pinkett Smith), an attorney working with the federal government who is attractive, friendly, and gives him her business card after paying her fare. Max thinks his luck is getting even better when his next fare, Vincent (Tom Cruise), offers him several hundred dollars in cash if he'll be willing to drop him off, wait, and pick him up at five different spots over the course of the evening. Max agrees, but he soon realizes Vincent isn't just another guy with errands to run -- Vincent is an assassin who has been paid to murder five people who could put the leaders of a powerful drug trafficking ring behind bars in an upcoming trial. As circumstances force Max to do Vincent's bidding, the cabbie has to find a way to prevent Vincent from killing again and save his own skin, a task that becomes especially crucial when he discovers Annie is one of the names on Vincent's hit list. Collateral also stars Mark Ruffalo, Peter Berg, and Bruce McGill as police detectives hot on Vincent's trail. ~ Mark Deming, Rovi

Jamie McBride
as Traffic Cop No. 2

Michael A. Bentt
as Fever Bouncer

Klea Scott
as Federal Agent No.1

Wade Williams
as Federal Agent No.2

Paul Adelstein
as Federal Agent No.3

Daniel Lujan
as Rubio No.1

Eddie Diaz
as Rubio No.2

Cruise lacked the deepdown malevolence required to bring Vincent to life. I wished him dead in the first few minutes he was on the screen -- and for the wrong reasons.

In the homestretch the thrills get too generic and farfetched for their own good. But the first two thirds are a knockout.

For Vincent's sharp-witted command of the cab and the echoes of The Third Man and Heat, Collateral is well worth targeting.

Throughout the gruesome cat-and-mouse game being played by Vincent and Max in Collateral, there's something psychologically, dramatically and even sociologically interesting going on.

This is a tense, first-rate thriller.

Collateral holds up despite its more pedestrian elements.

If the final destination's a bit of a disappointment, getting there is a lot of fun.

A visually striking film from the unhinged, endlessly creative mind of Michael Mann.

The year's best action thriller with excellent performances from its two leads and Mann's brilliant direction making something as pedestrian as a taxi ride a pulse-pounding thrill ride.

Powerful but violent thriller -- not for kids.

Mann takes a predictably clichéd, far-fetched crime yarn and transforms it into a fascinating thriller.

One of the best films by Michael Mann.

A captivating, accelerative, albeit glossily cliched ride through LA after dark. Shout-out to the horrible soundtrack and the awfully boring side characters.

I'm definitely not comfortable seeing Tom Cruise in negative character but he was good.