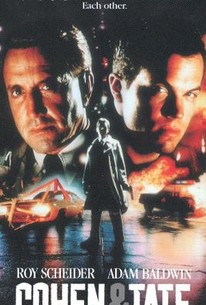 Travis (Harley Cross) is a nine-year-old boy who lives in Oklahoma with his federally protected parents. After the mob kills his parents for ratting on them, the gangleader demands that Travis be brought to Houston. Cohen (Roy Scheider) is the veteran hitman who signs on for one last job. Much to Cohen's dismay, he is paired with the psychopath Tate (Adam Baldwin). When Cohen does nothing to hide his dislike for his new partner, young Travis begins to play one thug against the other in a psychological mind game in hopes their confrontation will lead to his freedom.

Ina B. Bott
as Fat Woman
View All

News & Interviews for Cohen and Tate

Kane & Lynch Has Its Script

View All Cohen and Tate News

Critic Reviews for Cohen and Tate

Roy Scheider is perfect casting as the hardened pro Cohen, who tells his partner he's been doing this job for 30 years; you just have to look at that Mount Rushmore profile to know what he's been through.

Cohen & Tate is, at times, shockingly violent and, at other times, darkly funny. A solid, entertaining little thriller.

Given the restrictions of being a first-time director on a limited budget, Red didn't conceive Cohen & Tate to be different than other films of its ilk. He just opted to do it better.

A tightly wound, consistently intense and refreshingly uncompromising thriller that's the kind of superior B movie Hollywood used to make all the time.

Audience Reviews for Cohen and Tate

There are no featured audience reviews yet. Click the link below to see what others say about Cohen and Tate!