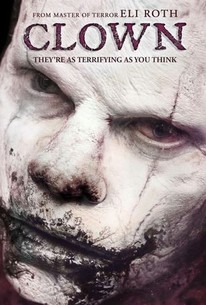 CLOWN is a story of a loving father who dons a clown outfit and makeup to perform at his son's sixth birthday, only to later discover that the costume--red nose and wig included--will not come off and his own personality changes in a horrific fashion. To break the curse of the evil outfit, the father must make grim choices with his own family facing danger.

Eli Roth
as Frowny the Clown

Julia A. Long
as ER patient

I would ask any up-and-coming special-effects artist: Just because you can mold a convincing replica of a 6-year-old's severed arm, does it necessarily mean that you should?

It comes apart about halfway through, losing a very difficult tonal balance. Having said that, there's more to like here than the studio burial would have you believe.

"Clown" has the goods. Refreshingly dark and sick, this is a movie for those who like cinematic monsters that hit so hard they leave a mark.

The film cuts both ways, with its clownish killer part Stephen King's Pennywise, part reality's John Wayne Gacy, & though the material comes with its own inherent ridiculousness, Watts sticks to the harder route of never playing it for laughs.

Clown is an impressive feat... but sadly it's not nearly as rough as it needs to be to justify its existence.

A few niggles along the way, but an enjoyable watch nonetheless - it felt predictable in parts but also original in others.

It's hard to not recommend a film that's so unique, clever and ballsy in nature. Clown is still a great weekend rental, especially for horror fans sick of the generic crap being unloaded on a weekly basis.

Even as the movie wavers uncomfortably between outright comedy and subversive horror, Clown certainly paves the way for future genre film endeavors from the rising director.

In the era when context means everything, Clown makes the fatal mistake of believing its audience just doesn't care about one.

With Clown, Jon Watts has crafted a genuinely creepy and disturbing body horror experience unlike anything I've ever seen before.

[Blu-ray Review] Classy and icky, atmospheric and chilling, "Clown" astutely plays into the unknown mystique coulrophobia is made of. Highly recommended.

This gently made horror film has a The Fly transition that is probably the only notable part of this film. I just couldn't get into the film, the characters were laughably dull and poorly developed. I think they should of spent the first half creating a family dynamic before shifting into darkness. The budget wasn't low enough to be campy and as low budget horror films go, this doesn't reinvent the wheel or even try. I still don't think the killer clown has been done justice and may change with the upcoming IT. Caught this on Netflix and while it was atmospheric, it just doesn't become anything worth recommending or a film to grow a cult status. 21-05-2017.

This movie ended up being somewhat of a disappointment. I definitely liked the concept and all that, this real estate agent improvises and dresses up as a clown, after the one he hired canceled, for his son's birthday party. He found this outfit in one of the houses that he is selling. Once the party is over, however, it comes out that he is unable to physically take off the costume or the wig, the wig later melding and becoming his own hair or something. The longer he has the suit on the more he starts turning into this sort of demonic being that feeds on children. And I thought that was cool, particularly with the dynamic that this guy, Kent, has a son and his wife is also expecting. So the film, should have, played with those concepts in an interesting way, but, and I don't know why, it just never came together as well as the concept might have come across on paper. There's just something about this movie that feels a little off. The acting isn't great, but that's not really as much of a problem in this type of movie as it would be in, say, a family drama. The fact of the matter is that clowns are a fairly common phobia among people, so exploiting that would've probably been considerably easier than this film attempted to. Though, I will say, that I do sort of like the mythos they build to establish the clown suit and everything that's wrong with it. But, to me, there just comes a point in the movie where I just zoned out and I was just waiting for it all to end. This movie goes something like 95 minutes or so and it still felt too long at that. And of course it's not that it was long, it's just it was poorly paced. It just wasn't well-structured in my opinion. There comes a time when Kent just disappeared and it's all about his wife's search for him and her trying to find a sacrifice for the demon in order for it to leave them alone. These parts just really aren't interesting to me and they just slow down a movie that really needed all the help it could've gotten. I guess these moments are relevant to where they need to go, but it still feels like a hollow way to extend the film's length. Another thing that bothers me about the movie is the make-up for the clown itself. At first it starts off really well actually. The changes are subtle, but you do notice them and they keep building and building. Each time you see Kent, he looks worse. From his teeth sharpening, to his skin becoming completely white like the clown make-up. When Kent reappears after the murder at the Chuck E. Cheese's, however, the subtle changes go out the window in favor for a full demonic clown. Just full-on monster make-up. And the problem with that is the fact that you spent all this time seeing subtle changes in Kent that when you do get to the full-on demon clown, it feels a little bit detached from it all. Like they're just killing a monster, they're not killing Kent, because there's nothing left that resembles Kent. At least prior to this, he looked somewhat like himself and his wife was forced to kill him, it'd at least feel like there was something human beneath the clown. As it ended up, there's nothing human there. So it's not really much of a dilemma. It is what it is. I did like the fact that the film did not shy away from killing children. So many movies are so afraid to even come close to touching that, but this one does and it may end up being controversial, but at least they're not afraid of the consequences. With that said, this movie still ends up being disappointment. It's not bad or anything, only average at best. I'd say just wait until it hits a streaming service you're subscribed to.

I have a recurring nightmare where I am unable to remove my clothes - either I can't take them off, or I take them off but there's layers upon never ending layers. It might sound mild as nightmares goes, but it's up there with those anxious dreams people have where their teeth fall out. Clown, in it's one effective moment, has the lead character unable to remove the clown suit he has put on to entertain his son at his birthday party. This aside though, the film is dull, dreary, monotonous and takes itself way, way too seriously, with a pukey color scheme and listless direction.

Clown suffered from bad acting but it was a truly refreshing horror film. Initially as a black comedy, the tone shifted to gorefest in the second half of the film. The film is about a cursed clown costume which turns the wearer into a demonic monster which eats children. A father accidentally found it and wore it for his son's birthday party but couldn't take it off. He slowly dwelt into madness and became a monster as his wife attempts to save him while protecting their son. A clever film, not a lot of scare but comparably better than most clown horror films. The use of children was ambitious, children aren't easy to work with but most children seem to be doing well in the film. The acting was kinda kitsch but the gore compensated it.