Cloudy with a Chance of Meatballs 22013 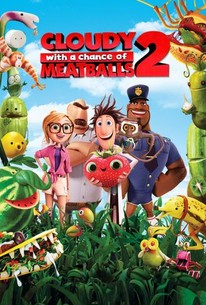 Critics Consensus: While not as clever or inventive as its predecessor, Cloudy with a Chance of Meatballs 2 compensates with enough dazzling visuals to keep younger viewers entertained.

Critics Consensus: While not as clever or inventive as its predecessor, Cloudy with a Chance of Meatballs 2 compensates with enough dazzling visuals to keep younger viewers entertained.

Critic Consensus: While not as clever or inventive as its predecessor, Cloudy with a Chance of Meatballs 2 compensates with enough dazzling visuals to keep younger viewers entertained.

Cloudy with a Chance of Meatballs 2 Videos

Cloudy with a Chance of Meatballs 2 Photos

Cloudy with a Chance of Meatballs 2 picks up where Sony Pictures Animation's hit comedy left off. Inventor Flint Lockwood's genius is finally being recognized as he's invited by his idol Chester V to join The Live Corp Company, where the best and brightest inventors in the world create technologies for the betterment of mankind. Chester's right-hand-gal - and one of his greatest inventions - is Barb (a highly evolved orangutan with a human brain, who is also devious, manipulative and likes to wear lipstick). It's always been Flint's dream to be recognized as a great inventor, but everything changes when he discovers that his most infamous machine (which turns water into food) is still operating and is now creating food-animal hybrids - "foodimals!" With the fate of humanity in his hands, Chester sends Flint and his friends on a dangerously delicious mission, battling hungry tacodiles, shrimpanzees, apple pie-thons, double bacon cheespiders and other food creatures to save the world again!

News & Interviews for Cloudy with a Chance of Meatballs 2

View All Cloudy with a Chance of Meatballs 2 News

Critic Reviews for Cloudy with a Chance of Meatballs 2

This film runs on cute ... and the result is a trip that goes nowhere at all.

Here is another happy, psychedelic digimation for kids, its two-dimensional characters delirium'd into 3D.

It's no triumph of screenwriting or subtext. But it's a feast of ingeniously rendered gastronomic insanity - and that'll do.

Madder than a box of chocolate frogs.

Imagine a Jurassic Park constructed entirely out of whatever foodstuff best satisfies your appetite for a pun.

There's no doubt animators have once again beat the odds and created an enjoyable sequel to another surprise hit.

The characters are actually better rounded this time and evolve in fun ways. Now that they're all together, the dynamic of the film is much more fun and lighthearted.

The joy of the new film is found in the journey through a multicolored jungle island populated with mutant food beasts.

There's little subtlety or character development and the plot is thin, but if the snappy psychedelic visuals and fanciful storylines captured your kid's attention first time around then it should do once again.

To enjoy Cloudy with a Chance of Meatballs 2 you'll need to relax and just enjoy the colors and creative visuals. The animation is eye-popping and the menagerie of food critters is truly inventive.

Cloudy With A Chance of Meatballs 2 is an example of a superior animated sequel that builds on the ideas of the first film and enriches its mythology.

Audience Reviews for Cloudy with a Chance of Meatballs 2

It's a loosely-written story that only the duo of Phil Lord and Chris Miller could sketch out. Cloudy with a Chance of Meatballs 2 dives in deeper in its appetizing-utopian realm, and it's a bit unnecessary at times, but it's still able to provide hilarity, colorful personalities and heartfelt vibes, that though it isn't as striking as its predecessor, it's still solid. 3.5/5

Something big was leftover. Good Entertainment! Cloudy with a Chance of Meatballs 2, a film that gives Flint Lockwood and the gang an extra journey to this whimsical world. And surprisingly, it turns out to be all fun with wonderful animation and some memorable humor, especially when it involves puns. It's still extravagant for it to have a sequel, but if you're hungry for more of these delightful characters and their preposterous adventures, then this film is a worthwhile treat. After the disastrous food storm in the first film, Flint and his friends are forced to leave the town. Flint accepts the invitation from his idol Chester V to join The Live Corp Company, which has been tasked to clean the island, and where the best inventors in the world create technologies for the betterment of mankind. When Flint discovers that his machine still operates and now creates mutant food beasts like living pickles, hungry tacodiles, shrimpanzees and apple pie-thons, he and his friends must return to save the world.

*** I must first admit that I own the first installment on blu-ray, but I honestly don't remember if I've watched it. I'm pretty sure I get the jest of it and the beginning of this sequel does a great job explaining the events of the first movie. Having said that, you don't need to see it to enjoy this, because it's pretty good on it's own. It picks up right where it left off, and Flint(Bill Hader) is recruited by an "Apple" type science company. Long story short the food he created has mutated and taken over their city, and he has to help stop/contain them. The movie has some twists and turns, and it's very, very funny. Not to mention the animation in this is awesome. The Tacodile is something to be seen for sure. We took Grant and he enjoyed it, so kids will definitely love it. Good news is, so will the parents. I've seen much worse animated movies out there. Hopefully the make another one, cause this franchise is pretty unique and I'd love to see where it goes next.

Starting immediately when the first film ends, "Cloudy with a Chance of Meatballs 2" has an entire world leftover to build upon, and does it completely explore it to it's fullest? No, but that is okay, because I would love to have another sequel made. I highly enjoyed watching these characters explore the leftover world that Flint Lockwood's machine has created, even if it is a much more kid-friendly film and some of the jokes are hit or miss. The visuals are bright and colourful and the 3D really does stand out. It may not be as cleverly written, but for a kids film, this picture has a a few more by-the-numbers story elements that seem all too familiar. It does not take full advantage of it's plot, but the food puns are a mile-a-minute and will keep you laughing the entire duration. Great for kids, and still pleasant enough for adults. This sequel is a lot of fun!

Cloudy with a Chance of Meatballs 2 Quotes