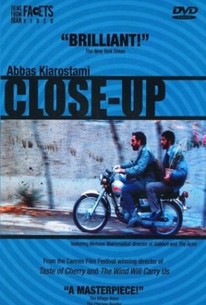 This Iranian film qualifies as a docudrama, and makes some telling comments on society as it tells its tale. In the story, Ali Sabzian, in a fit of whimsey, claims to a fellow passenger on the bus that he is the famous Iranian film director Mohsen Makhmalbaf. So far, so good, but he then becomes involved with his fellow passenger and her family, claiming that he has cast the family's son in a major role and that the setting he intends to use is their home. At some point this tale comes unravelled, and the family takes him to court. A well-meaning judge persuades the family to drop the charges against this unemployed man. Ironically, while Ali is on trial, the maker of this current film (Abbas Kiarostami) decides to film the procedings, and also stages a reconstruction of the events leading up to the trial, using all the actual participants, but has the restaged trial end less happily. ~ Clarke Fountain, Rovi

Hossein Sabzian
as Himself

Mohsen Makhmalbaf
as Himself

In Kiarostami's furiously clear view, religious dogma suppresses the eye's observations through the dictate of the word; his calmly unwavering images, with their wry humor and generous sympathy, have the force of a steadfast resistance.

The meanings of Close-Up shift, subtly and profoundly, with every viewing; the only certainty is that its rewards are boundless.

Successfully blends fact with fiction to produce a work more compelling than any of today's infotainment programs.

Kiarostami's film has artichoke-like layers which, once peeled, are forever resonant.

Kiarostami has made a film that looks into the heart of a man accused of a crime and, instead of evil, discovers only sweetness, longing and a sad confusion.

The gauzy, overlapping layers of identity and performance that Kiarostami uncovered in Close-Up still tantalize.

Does Close-Up reveal the truth? I'd prefer to say it reveals the beauty of distortion.

...not quite close enough.

Kiarostamis blending of fiction and nonfiction techniques produces a film that can be peeled back layer by layer, revealing something new at each level.

... a brilliant mix of contrivance, intimacy, distance, and dramatic closure peered into like a voyeur...

Compelling and utterly fascinating, but be warned: This is a rough-edged film that constantly shoves the viewer's face into the fact that it is a film.

That it remains difficult to classify Kiarostami solely as either a great director or a great journalist at the film's end only enhances the film's power.

Blending fiction and reality in ways that make it a unique experience, Kiarostami creates a fascinating piece of fiction-documentary hybrid that reveals always more and more about its characters and Iranian society (including social issues) than we could imagine to be possible.

kiarostami's masterpiece, radical cinema. i went in not knowing much about it and i recommend that approach. 'i'm tired of being me'

Had it not attempted to be so "artistic", and instead used cinematic liberties for better dramatization (again, with an entertaining instead of artistic approach) of this real life episode, I'd have enjoyed it far more than I did. Worth a shot in crisis.

I think my cool reaction to Close-Up is an issue of cultural division. Where many Iranian viewers find considerable merit in this, I thought it was interesting, but staid and ugly and painfully dull. I prefer Certified Copy, which explores many of the same themes in much more vibrant ways, in every respect.