Close Encounters of the Third Kind

Close Encounters of the Third Kind (1977) 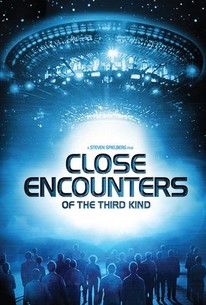 Steven Spielberg followed Jaws (1975), his first major box-office success, with this epic science fiction adventure about a disparate group of people who attempt to contact alien intelligence. Roy Neary (Richard Dreyfuss) is an electrical lineman who, while sent out on emergency repairs, witnesses an unidentified flying object, and even has a "sunburn" from its bright lights to prove it. Neary's wife and children are at first skeptical, then concerned, and eventually fearful, as Roy refuses to accept a "logical" explanation for what he saw and is prepared to give up his job, his home, and his family to pursue the "truth" about UFOs. Neary's obsession eventually puts him in contact with others who've had close encounters with alien spacecraft, including Jillian (Melinda Dillon), a single mother whose son disappeared during her UFO experience, and Claude Lacombe (celebrated French filmmaker François Truffaut), a French researcher who believes that we can use a musical language to communicate with alien visitors. Lacombe's theory is put to the test when a band of government researchers and underground UFO enthusiasts (including Neary) join for an exchange with alien visitors near Devil's Tower, Wyoming. In 1980, a "Special Edition" was released. While its primary selling point was the addition of scenes inside the alien spaceship, Spielberg claimed that he also cleaned up some choppy editing in the second act. ~ Mark Deming, Rovi

News & Interviews for Close Encounters of the Third Kind

View All Close Encounters of the Third Kind News

Critic Reviews for Close Encounters of the Third Kind

"Close Encounters" proves to be a magic act with dramatic interludes.

A film of incredible power and intensity. It is also, and ultimately, reassuring.

Time for another encounter.

It's a big ol' mess of a movie, but an extremely lovable one.

[Spielberg's] new movie is richer and more ambitious than Jaws, and it reaches the viewer at a far more profound level than Star Wars.

The person or persons responsible for the landing of the craft -- it is considerably more than a flying saucer -- on the Earth, the slow descent upon us of a city of gold, has made one of the most stunning shots in the history of movies.

A pseudo-mystical story that turns out to be boring, poorly constructed, and too long. [Full Review in Spanish]

I think what really struck me this time around was its commentary on media and communication.

Alas, beneath the visual hanky-panky stretches a thin, hackneyed plot that was done to death in the SF magazines and third-rate films of the Fifties.

What the film is 'about', in a way, is its own illusionism, the process by which it creates a world we are invited to share.

40 years after the film's release, the only thing that's aged is me.

Audience Reviews for Close Encounters of the Third Kind

Spielberg's classic UFO film is the blueprint for the barely used naive, optimistic alien encounter genre. The reason why very few movies after this one even went this direction and rather blew up the White House instead is simply that it can't get any better than this. Starting out wonderfully mysteriously and disturbing, sometimes even scary, the film soon concentrates on Dreyfuss' character's own approach to the things he saw on the night sky and his visions to culminate in nothing less than the biggest Christmas three ball of movie history. This film simply combines all the assets of Spielberg's early work perfectly. Even the special effects still look pretty good 30 years later, maybe excluding the aliens. And John Williams' melody went down in pop culture history. A masterpiece.

This sci-fi classic has aged well, the graphics still look great by today's standards. But the story was slow and the characters unmemorable.

An enchanting film with great special effects, yet I feel reluctant to regard the aliens as peaceful and awe-inspiring since they do abduct people, even children - and it is also hard to accept the protagonist's selfish decision at the end without any concern for his family.

Though I understand how groundbreaking this film was for it's time, viewing it now had always been a little dull to me. The conclusion though is a breathtaking piece of filmmaking.