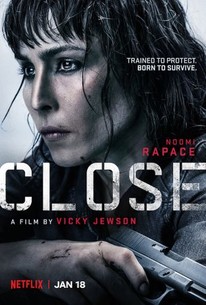 Critics Consensus: Close puts a welcome female-fronted spin on the prototypical action thriller; unfortunately, the rest of the movie's ingredients are tediously predictable.

Critic Consensus: Close puts a welcome female-fronted spin on the prototypical action thriller; unfortunately, the rest of the movie's ingredients are tediously predictable.

Close, an adrenaline-pumping action thriller written and directed by Vicky Jewson (Born of War), is inspired by the life of the world's leading female bodyguard, Jacquie Davis. The film stars Noomi Rapace as Sam, a counter-terrorist expert used to war zones, who takes on the job of protecting Zoe (Sophie Nélisse), a young and rich heiress - a babysitting job for her. But a violent attempted kidnapping forces the two to go on the run. Now they've got to take some lives - or lose theirs.

Close feels like many of the numerous direct-to-DVD titles that were prevalent during the 2000s.

Close is strong on all counts, until it seems to lose its nerve and decides to explain a character who was more compelling when the film let her be a lethal question mark.

Rapace gives the film her all, delivering an intense, physically demanding performance, but Close doesn't get close enough to transcending its action-movie clichés.

"Close" works well when it sticks to the distinctive personal details of this kind of job; but it too often defaults to a run-of-the-mill international thriller.

This a straight-out action thriller and... I would say not one of the better ones.

The clever use of sound and a gripping performance from Rapace almost redeem it, but a weak script and an anti-climatic finale lets down what could have been a very promising film.

Netflix's Close is an action film that succeeds in crafting authentic female characters.

Noomi Rapace is a badass bodyguard in Netflix's Close, but the movie's low-key racism counteracts its 'Yay, strong women!' message.

Hopefully Vicky Jewson and Noomi Rapace will reteam again for a sequel as this character is worthy of a franchise. One just hopes the plot will be as killer as Sam herself.

Filmmaker Vicky Jewson admittedly does a superb job of immediately drawing the viewer into the proceedings...

A generic action thriller whose lasting impact on viewers will depend to a large extent on how tolerant they are of scenes involving women getting smacked around repeatedly before eventually getting the better of their attackers.

There are no featured audience reviews yet. Click the link below to see what others say about Close!